Solid Pseudopapillary Tumor of the Pancreas in a Child: Imaging Findings with Diffusion-Weighted MR Imaging

A 13-year-old boy referring postprandial fullness and nausea for the past three months. Weight loss and pain in the upper quadrants of the abdomen recently occurred. Blood workup, including tumor markers, was unremarkable. Abdominal ultrasound (Figure 1) showed a well-circumscribed heterogeneous hypoechoic mass in the region of the pancreatic body/tail. Unenhanced CT (Figure 2) confirmed the pancreatic lesion with a slightly heterogeneous density. No calcifications were identified. T2-weighted MR images (Figure 3ab) showed a 4.8 cm heterogeneously hyperintense lesion in the pancreas, showing a hypointense rim. This rim was also hypointense on T1-weighted images (Figure 3c), consistent with the presence of a tumoral fibrous pseudocapsule. T1-weighted images also showed some internal areas of increased signal intensity compatible with hemorrhage. 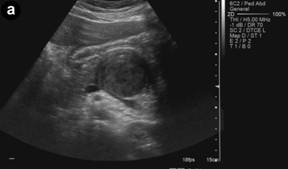 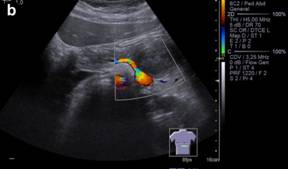 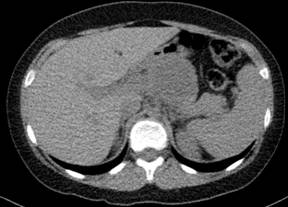 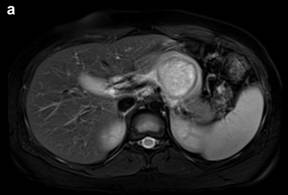 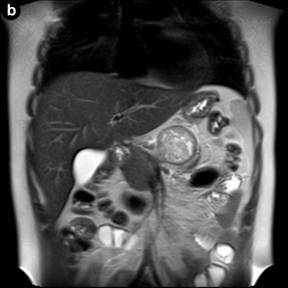 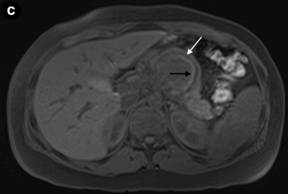 DW-MRI (Figure 4a) was performed (using b values of 50, 400 and 800) and the mean apparent diffusion coefficient (ADC) map was calculated (Figure 4b). The lesion presented a relatively high ADC value (1.8 x10-3 mm2/sec) compared to the ADC of the normal pancreatic gland (1.4 x10-3 mm2/sec), although there were some intralesional small areas of relatively low signal (minimum values of 1.3 x10-3 mm2/sec). T2/DW fusion imaging was performed (Figure 4c). Gadolinium-enhanced MR imaging (Figure 5) showed early peripheral enhancement of the fibrous pseudocapsule. No central contrast enhancement was observed. 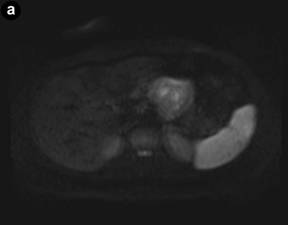 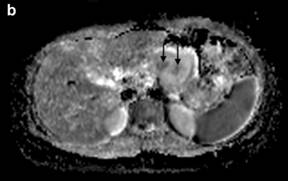 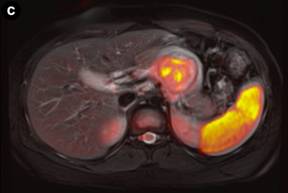 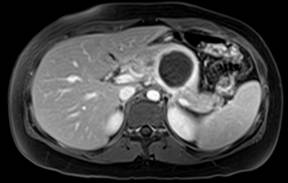 Clinical presentations of solid pseudopapillary tumor of the pancreas range from asymptomatic “incidental” to unclear clinical features like abdominal pain or discomfort, poor appetite and nausea, which are related to tumor compression on adjacent organs [2].

Solid pseudopapillary tumor of the pancreas is a low malignant potential exocrine epithelial tumor composed of monomorphous cells forming solid and pseudopapillary structures, frequently with hemorrhagic-cystic changes [3]. The tumor varies from solid to nearly completely cystic, with the majority composed of a mixture of the two components [4]. Occasionally, the tumors are nearly completely cystic with a small amount of residual solid tumor at the periphery [4].

It is a well-encapsulated solitary tumor, round to ovoid and occur throughout the pancreas [2, 4]. The tumor is usually large at presentation [4] but it generally displaces surrounding structures rather than invading them [5]. Because of its softness, solid pseudopapillary tumor rarely causes bile duct or pancreatic duct obstruction, even when it is located in the head of the pancreas [5].

On ultrasound, solid pseudopapillary tumor presents as a well-circumscribed heterogeneous mass surrounded by a pseudocapsule of compressed pancreatic tissues and reactive fibrosis, sometimes with central cystic areas of necrosis [6]. The capsule may be visualized as an echogenic or, less commonly, hypoechoic rim at ultrasound and typically hypoattenuating at CT [4]. Unenhanced CT may identify hemorrhage and tiny calcifications [6, 7].

The most common enhancement pattern of solid pseudopapillary tumor consists of early, peripheral enhancement of the tumoral pseudocapsule during the arterial phase, compared with the normal pancreas and the lesion itself [4, 5]. In some cases there is a progressive but heterogeneous fill-in of the lesion during the portal venous and equilibrium phases [5], showing less enhancement that the adjacent normal pancreas [4] consistent with a hypovascular tumor.

Our case report specifically illustrates the potential of DW-MRI findings in solid pseudopapillary neoplasms in pediatric patients. Wang et al. [8] describe DW-MRI in pancreatic lesions in adult patients and suggest that the components of the neoplasm (solid, cystic or hemorrhagic) determines the degree of diffusion and the ADC values, with the solid components accounting for the relatively low ADC values. In our case multiple b value DW-MRI allowed to discriminate better than T2-weighted or contrast-enhanced series the different components of the lesion according to signal behavior along with the increase in b value. Areas with low ADC values (compared to both normal pancreas and necrotic areas of the lesion) correspond probably to areas of increased cellularity. There are few reports about DW-MRI in cystic pancreatic neoplasms [8], so it remains to be established the role of DW-MRI to discriminate between benign and malignant lesions. Nevertheless, our findings emphasize the potential of DW-MRI to substitute contrast-enhanced imaging, particularly in the pediatric population.

3. Group WHOW. WHO histological typing of tumours of the exocrine pancreas. In: Hamilton S, Aaltonen L, eds. WHO classification of tumours: pathology and genetics of tumours of the digestive system. Lyon, France: IARC Press, 1996; 220.