Context Diffuse large B-cell lymphoma is the commonest form of non-Hodgkin lymphoma. Gastro-intestinal tract and bone marrow are common extra-nodal sites of lymphomatous involvement. Case report A 54-year-old woman presented with acute onset epigastric pain. On evaluation, raised serum amylase and radiological features of acute pancreatitis were detected. Gastroscopy revealed thickened folds in distal stomach, which on histopathology revealed large B-cell lymphoma. Subsequently, the patient developed extra-hepatic biliary obstruction due to peripancreatic lymph nodal mass that was relieved with plastic biliary stenting. Subsequent chemotherapy regime directed against lymphoma led to resolution of lymphoma. Conclusion In this patient , pancreatitis was the initial presentation of primary gastric lymphoma, which has not been commonly reported and therefore should be considered in the etiological workup.

A 54-year-old female presented with acute onset epigastric pain. The pain was severe, radiating to the back. There was no preceding history of biliary colic, abdominal trauma or nonsteroidal anti inflammatory drug intake. Patient denied any recent weight loss or substance abuse. She was a hypertensive taking amlodipine. Her pulse rate was 110/min, blood pressure 120/70 mmHg, respiratory rate 18/min, temperature 98.4°F (36.9°C). There was no pallor, icterus, peripheral lymphadenopathy or pedal edema. Abdominal examination showed a 7x6 cm vague fullness in the epigastrium that was tender on palpation. Bowel sounds were absent. There was no organomegaly. Other system examination was normal.

Her chest and erect abdominal plain films were normal. Hemogram and liver function tests did not reveal any abnormality. Serum calcium and triglycerides were normal.

After initial stabilization with analgesics, hydration and parenteral nutritional support, a CECT abdomen was done for better characterization of pancreatic head mass. It revealed a 6x5 cm conglomerated lymph node mass in the peripancreatic and periportal region encasing the hepatic artery with preservation of fat plane between the mass and pancreatic head. There was circumferential wall thickening of body and antrum of stomach (14 mm) with luminal narrowing (Figure 1). CA 19-9 was normal. Upper gastrointestinal endoscopy showed thickened folds in the body of stomach with antral nodularity and a few superficial ulcers. First part of duodenum showed a 2x1 cm ulcer on the postero-superior wall (Figure 2). 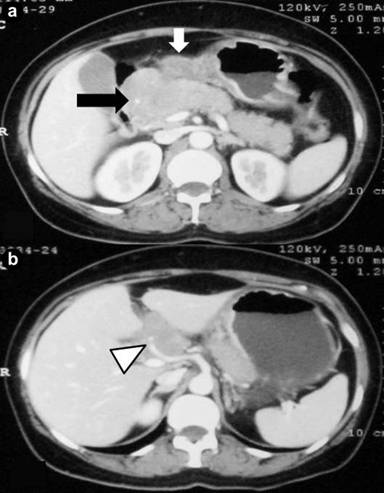 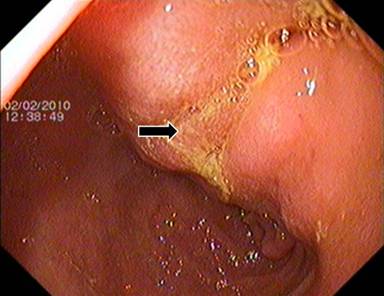 Biopsies taken from gastric body revealed diffuse infiltration by large atypical lymphoid cells with increased mitotic activity, that were immunoreactive for leukocyte common antigen and CD20 and negative for CD3 and cytokeratin. This was diagnostic of large B cell lymphoma. Duodenal and antral biopsies were normal and there was no evidence of Helicobacter pylori infection by rapid urease test and histopathology. CT guided fine needle aspiration cytology from lymph node mass in the peripancreatic region also revealed non Hodgkin lymphoma. Her HIV serology was negative. There was no lymphomatous infiltration on staging bone marrow biopsy and CECT thorax was normal. A final diagnosis of primary gastric lymphoma, diffuse large B cell type, Lugano stage II was made and she was planned for chemotherapy after consultation with the oncologist. Before starting chemotherapy she developed jaundice due to biliary obstruction due to compression by periportal and peripancreatic lymphnode mass which was managed by endoscopic retrograde cholangiopancreatography and placement of a plastic stent in the common bile duct. After her liver function tests normalized, she was started on R-CHOP (rituximab, cyclophosphamide, doxorubicin, vincristine, and prednisolone) for non Hodgkin lymphoma. She responded well to chemotherapy with relief of abdominal pain and was discharged on day 30 of hospital stay.

On last follow up at 12 months, she had completed 6 cycles of chemotherapy. Her abdominal pain was relieved completely; there was a 5 kg weight gain and follow up abdominal ultrasonography showed 50% reduction in the size of lymph nodal mass at pancreatic head region (2.5x1.6 cm). Repeat upper gastrointestinal endoscopy that was done post-chemotherapy was normal.

Primary gastric lymphoma often presents with nonspecific symptoms and the diagnosis is often delayed. Nonspecific abdominal pain (50%) or dyspepsia (30%) is the most common presentations. B-symptoms (fever, night sweat and weight loss) are distinctly uncommon in contrast to nodal lymphomas, thus delaying the diagnosis [4].

Our patient presented with features of acute pancreatitis in the form of epigastric pain, significantly raised amylase and lipase levels with ultrasound evidence of bulky edematous pancreas and peripancreatic fat stranding. Persistence of epigastric pain despite 10 days of conservative management prompted us to do a CT abdomen that showed stomach wall thickening with an adjacent lymph nodal mass in the peripancreatic region. Atypical features on CT scan like preservation of fat plane between the mass and the pancreas, hepatic artery encasement and the absence of pancreatic duct dilatation lead us to perform fine needle aspiration cytology from the peripancreatic mass and stomach biopsy that diagnosed diffuse large B cell lymphoma of the stomach. Absence of peripheral lymphadenopathy and hepato-splenomegaly along with normal hemogram, bone marrow examination and CECT thorax suggested that the stomach was the site of origin of lymphoma. Endoscopic ultrasound has recently been shown to be very helpful in evaluation of these patients with regards to better loco-regional assessment, higher sensitivity as well as less risk of seeding while doing needle cytology [5]. For assessment of the gastric wall infiltration and perigastric lymphonodular involvement EUS can be very useful. Therefore, EUS should be integral part of the standard staging procedure in cases of gastric lymphoma [6].We had not done EUS guided fine needle aspiration cytology in our patient.

Acute pancreatitis as a complication of adenocarcinoma of pancreas is well described [7, 8]. Pancreatitis is believed to be secondary to obstruction of main pancreatic duct by the tumour. Cytokines, like TNF-alpha and interleukin-1beta, released from the tumor, tumor microemboli causing ischemia, and tumor related hypercalemia are other factors that could predispose to pancreatitis. There are also few case reports of acute pancreatitis as initial presentation of nodal non Hodgkin lymphoma [9, 10] and pancreatic lymphoma [11, 12].

Acute pancreatitis, as presentation of primary gastric lymphoma, is distinctly uncommon with our being the first case described. The pancreatitis in our case could be secondary to pancreatic duct obstruction by the nodal mass secondarily to gastric lymphoma but at the time of presentation there was no evidence of biliary or pancreatic obstruction on biochemistry/imaging, though later on it became evident. Therefore, we consider that obvious features of biliary/pancreatic obstruction may not always be evident at the time of presentation in such cases. As CT scan abdomen in pancreatitis at our center is limited to patients with severe disease, uncertain diagnosis and evolving complications, high index of suspicion is needed to look for uncommon etiologies like in our case.

Acute pancreatitis can be a rare presentation of primary gastric lymphoma and appropriate evaluation can lead to early diagnosis and successful outcome as in our case.