A 37-year-old man presented with history of abdominal pain for 3 months and melena for 2 days. He had similar episode of melena two weeks prior to presenting to our hospital when he was admitted to a local hospital and was transfused four units of packed red blood cells. The pain was of moderate to severe intensity, non-colicky, upper abdominal, not radiating to back, and had no relation to meals. There was no history of hypertension, diabetes mellitus, or ingestion of NSAIDs. On examination, he was pale and had mild tenderness in the upper abdomen. After admission, he was resuscitated with colloids and two unit of packed red blood cell transfusion. 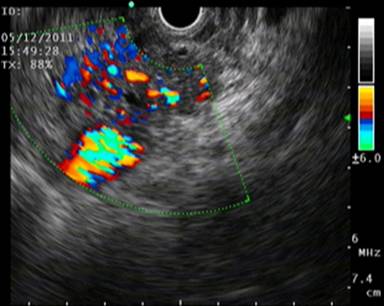 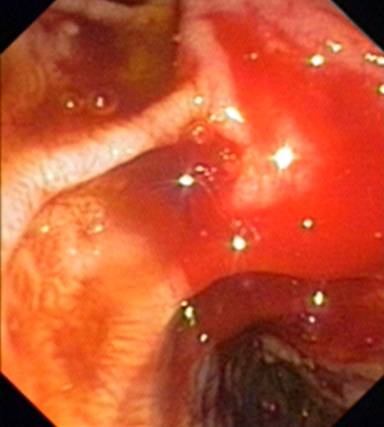 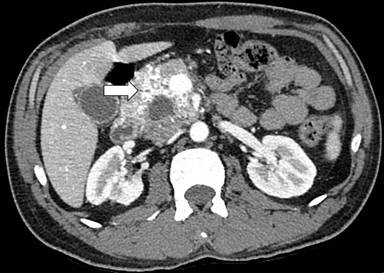 The patient had recurrence of upper gastrointestinal bleeding three days after the endoscopic intervention, requiring transfusion of two more units of packed red blood cells. He was taken up for emergency endoscopy which revealed bleeding ulcer in the proximal duodenum and a repeat session of injection sclerotherapy was done; however, the bleeding did not stop. In view of continuing bleeding, the patient underwent conventional angiography which revealed a diffuse vascular blush in the head of the pancreas (Figures 4 and 5) with early filling of the veins suggestive of tumor blush. Feeder from the gastroduodenal artery was embolized with gelfoam and coil. Check angiography showed no early filling of veins. Superior mesentery artery angiogram showed similar blush in the same region but could not be embolized. 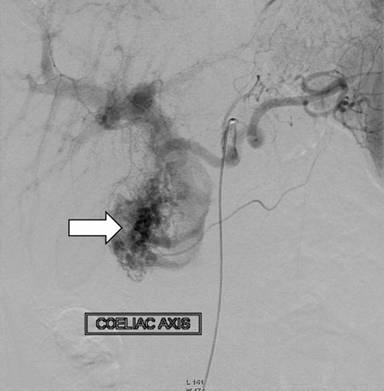 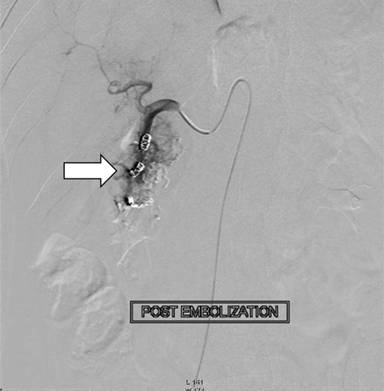 The patient continued to have abdominal pain with bleeding requiring multiple blood transfusions. The patient underwent Whipple's surgery in view of failure of endoscopic and radiologic interventions and suspicion of bleeding lesion in the head of pancreas. The surgical findings revealed bulky pancreatic head with multiple collaterals around the head. There were multiple cystic spaces in pancreatic head and uncinate process. The pancreas distal to the neck was normal (Figure 6). Histopathology of the resected specimen (Figure 7) revealed the diagnosis of the pancreatic arteriovenous malformation. Patient had an uneventful post-operative course and was discharged in four weeks in a stable condition. 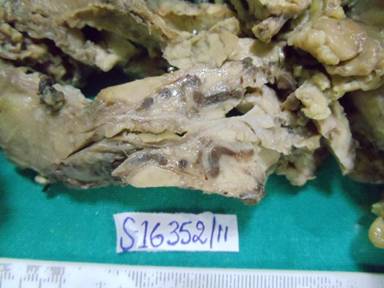 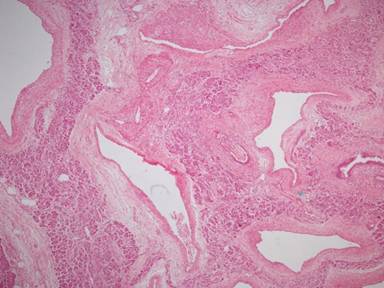 Surgical resection is the treatment of choice with the intention of curative procedure [4] but it is associated with the risk of massive intraoperative bleeding. Thus other modalities like transarterial embolization [11], embolization performed with use of embolic liquid agent, like ethylene-vinyl alcohol copolymer (onyx) [12], radiation therapy [13] and placement of a transjugular intrahepatic portosystemic shunt [14] have been described. Most common surgical intervention for the pancreatic arteriovenous malformation is pancreatic resection followed by distal pancreatectomy with splenectomy and last is total pancreatectomy. In the series by Song BK et al. [6], of 11 patients undergoing surgery, pylorus preserving pancreaticoduodenectomy or pancreaticoduodenectomy was done in 3 patients, distal pancreatectomy in 4 patients, total pancreatectomy in 3 patients, and central pancreatectomy in 1 patient. Surgical resection of the affected pancreas is the most effective treatment of patients with symptomatic pancreatic arteriovenous malformation. Transjugular intrahepatic portosystemic shunt and radiation therapy might be other treatment options when a patient is at a high risk for surgical treatment [4].

In conclusion, pancreatic arteriovenous malformation is a rare cause of upper gastrointestinal bleeding and needs a high index of suspicion when bleeding is detected from the medial wall of second part of duodenum. Once diagnosed it can be successfully managed surgically; however, in high risk cases other modalities of treatment like transarterial embolization, transjugular intrahepatic portosystemic shunt, or radiation therapy may be used.