Annular Pancreas in Adults: A Report of Two Cases and Review of Literature

Context Annular pancreas is one of the rare congenital anomalies that can manifest itself in adulthood also. No specific guidelines and protocols exist about management of such cases. We hereby discuss our experience with two such cases along with a brief review of literature about the subject. Case reports The first patient was a male aged 27 years and presented with features of duodenal obstruction. He underwent duodenoduodenostomy . The second patient, a male aged 32 years, also presented with features of gastric outlet obstruction. He underwent Billroth type 2 reconstruction. Both patients had an uneventful recovery. Conclusion Annular pancreas in adults is a rare clinical scenario. Advancements in imaging modalities have brought to forefront an even larger number of such cases. In adults it is diagnosed mainly because of the complications that arise thereof. Gastroduodenal tuberculosis can be an important differential diagnosis in endemic areas. Treatment and operative protocols have to be individualized.

Annular pancreas is a rare congenital anomaly characterized by the presence of a pancreatic tissue of variable width completely or partially obstructing the second part of duodenum. It is formed due to failure of normal migration of the ventral pancreatic bud, which results in a part of pancreatic tissue encircling the duodenum. It is one of the few medical conditions which can present itself in a wide range of clinical severities. It usually affects neonates, but in the elderly it can mimic a wide range of clinical entities like peptic ulcer, pancreatitis, obstructive jaundice, etc., thereby making the diagnosis difficult. At present imaging modalities as computerized tomography (CT), endoscopic retrograde cholangiopancreatography (ERCP), and magnetic resonance cholangiopancreatography (MRCP) are used to arrive at a diagnosis. Each modality though has its own limitations.

A 27-year-old male presented with a 6-month history of pain upper abdomen and recurrent episodes of vomiting. The pain was present on and off. It was burning in nature, mild to moderate in intensity, poorly localized in the upper abdomen and was relieved by vomiting. Vomiting was recurrent, bilious and non projectile. There was no history of hematemesis.

On examination the patient was of thin built. General physical examination was essentially normal. Abdominal examination did not reveal any mass or any organomegaly and did not contribute significantly. Routine investigations revealed no specific abnormality. Ultrasonography of the abdomen was normal. Barium meal follow through of the patient revealed a mildly dilated stomach with narrowed segment at the post bulbar area. Upper gastrointestinal endoscopy revealed an injected D1 mucosa with multiple small irregular ulcers. There was luminal narrowing at the level of D2 arising as a result of extrinsic compression. CT did not show any significant lymphadenopathy or any mass lesion.

Laparotomy was undertaken which showed that the second part of duodenum was completely encircled by a band of pancreatic tissue causing partial obstruction confirming the diagnosis of annular pancreas (Figure 1). A diamond shaped duodenoduodenostomy was done. The patient had a normal and uneventful post operative course. He was discharged on the 9th post-operative day on full oral diet. The patient was completely asymptomatic on follow up and had gained weight. 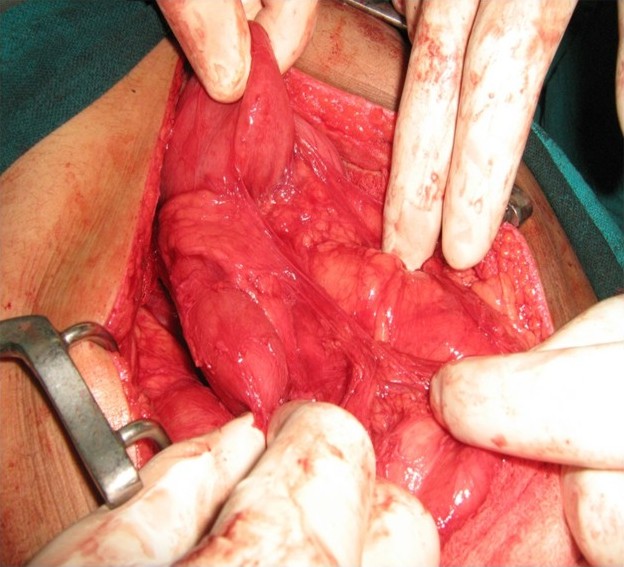 A 32-year-old male patient was admitted with history of recurrent episodes of vomiting from past 8 months. Vomiting was not blood-stained . The episodes of vomiting used to occur postprandially. He had a history of treatment for pulmonary tuberculosis two years ago, for which he had received antitubercular chemotherapy for 9 months.

General physical examination was essentially normal. His vital parameters were within normal limits. Abdominal examination revealed no organomegaly and did not contribute much to the clinical diagnosis.

Routine biochemical and hematological investigations were within normal limits. Upper gastrointestinal endoscopy revealed a small benign ulcer at the pyloric area. The first part of the duodenum was injected and was found to be dilated and the second part of the duodenum was narrowed with some extrinsic compression, the scope could not be passed beyond D2 (Figure 2). An abdominal CT revealed a ring of pancreatic tissue encircling the second part of duodenum. 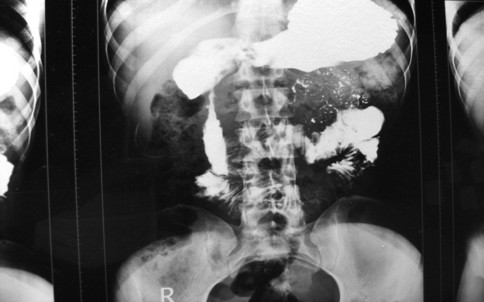 The patient underwent an exploratory laparotomy, which showed multiple small and matted lymph nodes with intense fibrosis and scarring in the periduodenal and peripancreatic area. There was a small narrow band of pancreatic tissue also encircling the second part of duodenum resulting in proximal duodenal dilatation. An anterior highly selective vagotomy with posterior truncal vagotomy and isoperistaltic gastrojejunostomy was performed, using inner continuous vicryl and outer interrupted sero-muscular layer with 3/0 atraumatic silk. Lymph node sampling was also done. Post-operative period was uneventful and the patient was discharged on the 12th post-operative day.

It was first reported by Tiedermann in 1818 [1] and named as annular pancreas by Ecker in 1862 [2]. The first surgical treatment for an obstructive annular pancreas was performed by Vidal in 1905 [3]. The rarity of the condition was supported by Vasconcelos and Sadek who reported a single case in 22,243 autopsies [4]. However, this number may not indicate the true prevalence because duodenal dissection is not routinely performed during autopsy. An incidence of 1.14% has been reported by Karasaki et al. based on institutional review of CT scans [5].

Many theories have been postulated to explain the origin of annular pancreas [5]. Leeco’s and Baldwin’s theories are the most acceptable among all. Leeco postulated that it is the adherence of the ventral pancreatic bud to the duodenal wall and subsequent failure of its migration which leads to formation of annular pancreas [6]. However, Baldwin reported that this condition arose because of the abnormal movement of the ventral pancreatic bud [7]. D2 is involved in 74% of the cases [8].

Only 737 cases have been reported in the English literature till date with a slight female preponderance. Majority of the reported cases have been reported in the infant/newborn population. In infants/newborns the main mode of presentation is that of duodenal obstruction. In this scenario it may often be present with various other congenital anomalies. The spectrum of clinical presentation in adult population is however quite variable. It may present as duodenal obstruction, pancreatitis (acute, chronic, recurrent) or may manifest with symptomatology of peptic ulcer disease [9]. It may rarely be associated with obstructive jaundice and even rarely malignancy [10].

Even in this era of radiological sophistication, diagnosis may require surgical confirmation in more than 40% of the cases [11] as each imaging modality has its own limitations. The use of contrast enhanced computed tomography (CECT) in infants is limited by the paucity of abdominal fat which serves as a reference for enhancement. The use of CECT in adults is limited by the narrowness of the ring and by the fact that the pancreatic ring may lie intramurally in the duodenum without any plane existing in between. ERCP is invasive and can precipitate/exacerbate pancreatitis, besides the presence of a narrowed lumen may preclude its use. Use of MRCP is limited by the fact that it requires a dilated ductal system [12].

Surgical intervention is required whenever annular pancreas is symptomatic. In those who present as duodenal obstruction a simple enteric diversion procedure is done, with duodenoduodenostomy being the preferred procedure. It has the advantage of being the most physiological by having the least blind loop segment. Gastrojejunostomy (with or without gastric resection) requires an additional vagotomy especially in the young because of the propensity to cause ulcerations of the stoma of gastrojejunostomy. Inflammations and adhesions in the C loop may preclude the possibility of a duodenojejunostomy.

Although reported in literature, pancreatic resection is associated with a higher incidence of complications as pancreatitis, pancreatic fistulae and pancreatic insufficiency. Even the minor degrees of pancreatic leaks that go unnoticed on a gross level can cause an intense local inflammatory response which can induce an intense local inflammatory and fibrotic reaction causing variable degree of luminal compromise of surrounding structures . Pancreatic resection is reserved to those rarest cases where malignancy cannot be excluded [13].

A diagnosis of annular pancreas should be kept in mind even in the adult population. Tuberculosis may be an important differential diagnosis in endemic countries. Treatment options need to be individualized.

Conflict of interest No competing or financial interests