Context The major goals that must be achieved during pancreaticoduodenectomy (PD) include reduction of postoperative hemorrhage and/or operating time. We herein describe a new technique for PD examining right posterior approach PD. Methods From January 2012 to December 2013, 116 patients underwent PD for periampullary or pancreatic disease. Of these 116 patients, 56 cases were surgically treated for pancreas head or periampullary malignancy and were studied for blood loss volume and length of operation. Results An interesting issue in the present study was related to operating time and intra-operative blood loss. The median blood loss volume and operating time were 349 mL (35-3,636 mL) and 276 min (188-467 min), respectively, in patients who underwent a right posterior-approach PD. Conclusion The estimated operative blood loss volume and operative time are lower in right posterior approach PD, probably due to clearly detection a route of the inferior pancreaticoduodenal artery from the SMA and following early ligation of the inferior pancreaticoduodenal artery and reduced congestion of the pancreatic head.

Improvements in surgical technique, increased surgical experience, and advances in anesthesia, intensive care, and parenteral nutrition have made pancreaticoduodenectomy (PD) a substantially safer procedure and the mainstay of curative treatment for periampullary and pancreatic head malignancy. The major goals that must be achieved during pancreatic resection include reduced postoperative hemorrhaging and operation time, because integrated resection of the pancreatic head is the most difficult step of radical PD in patients with invasion or oppression of the portal vein and superior mesenteric vein by the tumor.

Patient data were obtained by retrospective review from a prospectively gathered database at the Kochi Health Sciences Center of 116 patients who had undergone PD for periampullary disease or diseases of the pancreas from January 2012 to December 2013. Of these 116 patients, 56 cases surgically treated for periampullary malignancy excluding chronic pancreatitis and invasive ductal adenocarcinoma of the pancreas were analyzed for this study. We focused on the estimated blood loss volume and time taken during surgery. Of these 56 patients, 36 were men and 20 were women, ranging in age from 18 to 90 years (mean = 70.9 years). Diagnoses were extrahepatic cholangiocarcinoma in 24 of the 56 patients, intraductal papillary mucinous neoplasm of the pancreatic head in 12, carcinoma of the Papilla of Vater in 11, duodenal carcinoma in 4, endocrine neoplasm of the pancreas in 2, and other malignancies of the periampullary region in 3 cases.

A laparotomy is performed through a median incision, then the left duodenomesocolic fold is incised, and the retroperitoneum is opened longitudinally. With the transverse colon lifted upward, the pancreatic head and the duodenum are then freed from the anterior surface of the inferior vena cava. After that, Kocher’s maneuver is performed to reflect the third and fourth part of the duodenum, and the pancreas becomes elevated so that a hand can be passed behind it to palpate the tumor mass. After dividing the right gastroepiploic vein, the anterior branch of the inferior pancreaticoduodenal vein and accessory right colic vein, and the anterior surface of the portal vein (PV) are carefully dissected from the posterior part of the pancreatic neck. The common hepatic artery is then carefully dissected, and the gastroduodenal artery is identified, ligated, and divided. The cholecystectomy is then performed, and the common bile duct is ligated and divided, allowing the PV to be dissected free from the pancreas at its superior edge. Tunneling through the pancreas in front of the portal vein is not performed. Depending on the type of procedure (Whipple or pylorus-preserving PD), the stomach or the duodenum is transected. After reflection of the duodenum and first jejunal loop beneath the mesenteric vessels, the first jejunal arteries can be divided (Figure 1a). The upper jejunal arteries usually arise from the left dorsal aspect of the (SMA). The next surgical step is complete separation of the SMA from the right retroportal process; the SMA is therefore set free until its entry into the mesentery, and this step is very important because during this stage, tumor involvement to the SMA can be identified. The ligament of Treitz is divided and the first jejunal loop (after mobilization of Treitz’s angle) is dissected. As the upper jejunum is pulled further to the right side through Treitz’s angle, the SMA is rotated in a clockwise direction to allow visualization of the inferior pancreaticoduodenal artery (IPDA) route from the SMA according to the landmark of the ligated first jejunal artery (right posterior approach), although the route of the IPDA is not clearly seen with either the left posterior approach or anterior approach (Figure 1b). Then, the pancreatic head along with distal common bile duct, duodenum (± distal stomach), and first jejunal loop is pulled up from the right side of the SMA after ligation of the IPDA route (Figure 1c). The dissection of the PV is continued up by inferomedial traction of the duodenum and pancreatic head, and then the PV is traced up to the level of the pancreatic neck by ligating and dividing the surrounding tissues, thus completely exposing the suprapancreatic PV. The posterolateral side of the PV is carefully dissected, ligating the tributaries. Since there is an avascular plane between the PV and pancreatic neck, after this dissection, the posterior surface of the pancreatic neck is exposed (Figure 1d). Finally, the pancreas is transected and the resected specimen is removed. 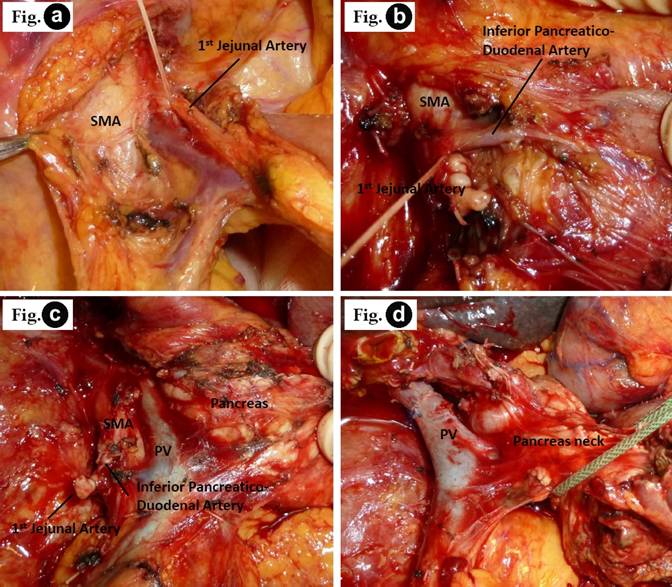 Reconstructions after resection (anastomosis of the pancreas, bile duct, and stomach/duodenum to the ascending jejunum) were performed by Child reconstruction. In the present series, anastomosis of the pancreas to the jejunum was first performed. In cases with enlarged Wirsung and remnant pancreas, a duct-to-mucosa anastomosis was performed using continuous sutures with no-stent technique; in cases where the small diameter was less than 2 mm of the Wirsung with “soft” remnant pancreatic tissue, a duct-to-mucosa anastomosis was also performed using interrupted sutures with lost stent tube. After that, the choledocus was implanted into the jejunum using continuous sutures. Depending on the type of operation (Whipple or pylorus-preserving PD), the stomach or the duodenum was sutured to the jejunum by continuous sutures. The median estimated blood loss volume and operation time were 349 mL (35-3,636 mL) and 276 min (188-467 min), respectively, in patients who underwent the right posterior-approach PD.

PD remains a challenging operative technique even nowadays, and is generally indicated for malignancies of the pancreatic head and periampullary region (ampulla, distal common bile duct, duodenum). For many years, PD was associated with a high mortality rate (up to 25–35%); however, experienced surgical centers have more recently reported a notable decrease in mortality, with current mortality rates after PD expected to be below 5%. There are even high-caseload hospitals that report no postoperative mortality. However, morbidity after PD still remains an important issue (up to 40–60%), and is mainly correlated with intraoperative hemorrhage and length of surgery [2].

The left posterior approach is a modified technique of standard PD that was initially proposed by Pessaux et al. based on anatomical studies of the retroportal lamina. This approach was proposed to overcome some technical difficulties and to achieve an oncologically acceptable lymph node dissection. It was also associated with a significantly reduced mean blood loss and operating time in the left posterior-approach PD group vs. the standard PD group [3, 4]. However, the left posterior approach consists mainly of early dissection of the SMA and the posterior pancreatic capsule (“SMA first approach”). Thus, some technical difficulties such as lymph node dissection on the right side of the SMA and superior mesenteric vain (SMV), and presence of a replaced right hepatic artery can be easier managed.

Analysis of the American College of Surgeons-National Surgical Quality Improvement Program for 4,817 patients who underwent a PD from 2005 to 2008 demonstrated that peri-operative red blood cell transfusion was associated with 30-day morbidity in a stepwise manner. Moreover, longer operating times also linearly correlated with increases in both 30-day morbidity and mortality. This analysis suggests that peri-operative blood loss volume and prolonged surgeries should be considered quality indicators for PD performance [5]. In this study using the right posterior-approach PD, both operating time (median 276 min) and intraoperative blood loss (349mL) were lower compared with previous reports [6]. The standard PD by left posterior approach and anterior mesenteric approach, even in experienced centers, is associated with relatively high blood loss (mean of 700-1,500 mL) and relatively long surgeries (mean of 316-319 min). An explanation for reduced blood loss with the right posterior-approach PD could be early and adequate ligation of the IPDA route from the SMA, thus reducing congestion into the pancreatic head (along with the gastroduodenal artery and portal vein tributary ligation).

Limitations of this study include the associated errors and biases inherent in a small study design. First, as a retrospective and registry-based study, the possibility of bias cannot be eliminated. Second, we were unable to analyze the precise impact of additional surgical components (i.e., diagnostic laparoscopy and/or concurrent vein resection), because 56 cases which was surgically treated for peiampullary malignancy excluding chronic pancreatitis and invasive ductal adenocarcinoma of the pancreas were studied with a focus on the estimated blood loss volume and operating time. Third, although morbidity and mortality are powerful indicators of quality, additional metrics that may also be helpful in assessing postoperative complications are not evaluated in this study, whereas among the complications following pancreatic resection including anastomotic leakage, intra-abdominal abscess formation, and surgical site infection, pancreatic fistula remains especially problematic with its significant risk of a fatal outcome [7]. Large randomized control trials are recommended to further evaluate the effect of right posterior-approach PD on surgical management in patients with periampullary or pancreatic head malignancy.

In conclusion, this study confirmed that limiting blood loss and avoiding prolonged surgeries should be goals for pancreatic surgeons. The estimated blood loss volume and duration during surgery were lower after right posterior-approach PD, probably due to the more discernible route of the IPDA artery from the SMA, early ligation of the IPDA, and reduced congestion of the pancreatic head.