It is strongly believed that vanadium might be a valuable supplement to insulin in the treatment of diabetes mellitus [4, 5, 9, 10]. Many reports have reiterated in partial diabetic rats vanadium reduced high blood glucose, proliferated pancreatic beta cells and prevented the recurrence of hyperglycemia after withdrawal [11-13]. Microscopic examinations of the pancreas of diabetic rats have also demonstrated vanadium repaired the damaged beta cells, prevents pancreatic islet atrophy and restored islet insulin storage [5, 13-15]. With appreciation of the beneficial actions of vanadium in relieving diabetic symptoms and preventing islet-dysfunction, the present study intended to find whether the relief of hyperglycemia with vanadium or insulin therapy helps the repairing of beta-cell ultrastructure.

Male healthy Sprague Dawley rats (200-250 g) were obtained from “Central Animal House Facility of Shiraz University of Medical Sciences”. All the protocols of the study were approved by the Institutional Ethical Committee of the University which follows the NIH guidelines for care and use of animals (NIH publication No. 85-23, revised in 1996). Rats were housed in standard cages in a room with controlled temperature (22-24°C), humidity (40-60%) and light period (07:00-19:00), while having full access to food (rat food, Parsdam, Tehran, Iran) and water.

The drinking solutions used in this study contained 3 g/L NaCl distilled water (base solution) or vanadyl sulfate (1 mg/mL VOSO4 + 5 H2O, Merck, Germany) in base solution. The solutions were prepared fresh every 3-5 days and stored in the dark cold room (4oC) until use.

Rats were anesthetized with ether and blood (500 µL) was collected from the tip of the snipped tail. Two μL of the blood was used to measure blood glucose (BG) with glucose monitoring system (Glucocard® 01-Mini, Arkray, Inc., Kyoto, Japan) and the rest was centrifuged (12,000 ×g) and its serum were stored in a freezer (-70°C) for the future assessments of insulin.

Diabetes was induced with a single intravenous dose of freshly prepared streptozotocin (STZ; 40 mg/kg dissolved in normal saline, Sigma, USA) through the lateral tail vein. Non-diabetic rats received the same volume of normal saline. Induction of diabetes was confirmed 48-72 hours after STZ injection by the presence of hyperglycemia (BG ≥350 mg/dL), polydipsia (fluid intake ≥100 mL/day) and polyuria (wet cage). Animals were housed in the same room but in separate cages (1 per cage).

Rats were divided into 4 groups:

The first group (n=12) considered as control normal (CN) which during the study used base solution as drinking water.

Preparation of the Pancreas

After 2 months treatments the animals were sacrificed under deep anaesthesia (ketamine/xylazine 70/10 mg/kg), sacrificed and the whole pancreas was gently dissected out and prepared for staining. The prepared pancreatic tissues were randomly assigned for hematoxylin and eosin (H/E), immunohistochemistry. Some the pancreases were prepared for subcellular examinations of beta cells with transmission electron microscope (TEM). Samples were obtained from the same regions of the pancreas to have better judgments about the changes that may occur in islets and their beta cells.

Pancreas was fixed in 10% neutral buffered formalin (pH 7.4) and 48 hours were kept at room temperature. After fixation and dehydration with graded ethanol series, paraffin blocks were cut to 4 microns thick sections, deparafﬁnized with Xylene and rehydrated, in a descending graded series of ethanol and at the final stage rinsed with 0.02 M phosphate buffer saline (PBS). Three to 5 tissue sections of each pancreas were used for beta-cell immunofluorescence staining. At this stage the activity of endogenous peroxidases were blocked by submerging the paraffin-embedded tissues in methanol containing 3% hydrogen peroxide. The use of non-immune serum helped to eliminate non-specific background colors. Primary anti-insulin clone antibody (Sigma I-2018) was used to detect the insulin containing beta cells. For 20 minute the sections successively incubated in biotinylated antibody and rinsed with PBS. Histostain-Plus kit (Zymed Code 859943) was used according to the methods describe by Bolkent et al. investigators [11]. The use of amino ethyl carbazole (AEC) created an intense red deposit around the antigen/antibody enzyme complex. Sections arbitrarily coded and blindly examined with light microscope by two independent experts.

Islets prepared by collagenase according the Lacy method [16]. In brief, the common bile duct was cannulated and the pancreas was distended with 10 ml Hank's Balanced Salt Solution (HBSS). The pancreas was carefully dissected from surrounding tissues, cut into small pieces and immediately digested in HBSS containing 2 mg/mL type B collagenase. Twenty mL of the fresh PBS was added to the digested solution and centrifuged for 5 min (1,000 rpm). The supernatants were discarded; the pellets were washed with HBBS and then re-suspended in 15 mL HBSS. The prepared samples were transferred to a 15 ml dark stained Petri dish, islets handpicked under dissecting microscope and subsequently fixed (2.5% glutaraldehyde and 2% paraformaldehyde in 0.1 M cacodylate buffer) and finally post-fixed (90 min) in osmium buffer (1% OsO4 in 0.1 M cacodylate). Samples were dehydrated by passing them through an ethanol series, then embedded in Epon (TAAB, Berks, UK) and sectioned into semi-thin (1 µm) pieces. The sections were stained with toluidine blue and examined with light microscopy for documentation of islets. The tissue blocks were re-trimmed and sectioned ultrathin (60-90 nm, collected on copper grids) and immersed in uranyl acetate (15 min at room temperature). The stained sections were repeatedly washed in distilled water, dried and subsequently stained for 12 min with lead citrate. At the end sections were randomly coded numerically and examined by two individual experts (blinded to the data) with transmission electron microscope (TEM, Philips CM-10).

Data are presented as mean±SEM. Wilcoxon-Newman and Mann-Whitney tests were used to obtain the statistical differences among the means of intra- and between groups for blood glucose and insulin. Repeated measurement test was used for the comparison of body weight. Values are considered as statistically significant at P<0.05.

Table 1 shows the growth body weight and daily fluid consumptions of normal and diabetic groups before and after induction of diabetes. While, the growth weight in CD and VTD were stopped a steady state increase in body weight was observed in CN and ITD groups. The measurements of fluid consumption indicated induction of diabetes significantly increased daily water intake (Table 1). Tow month treatment of diabetic rats with vanadium or insulin significantly reduced water intake such there were not any significant differences among data of CN and VTN groups.

The BG of normal and diabetic groups is presented in Figure 1. Data indicated before the start of the treatment BG significantly increased in all diabetic rats of CD, VTD and ITD groups. During 2 month period of the study hyperglycemia worsened in CD group, but significant reductions were observed in BG of VTD (138±14 mg/dL) and ITD (141±14 mg/dL). 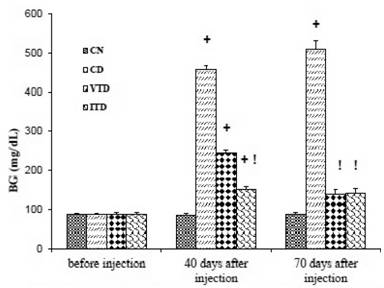 Figure 2 shows the levels of insulin in normal and diabetic rats. Before induction of diabetes no significant variations were observed among the levels of insulin. Thirty days after the start of treatments (40 days after STZ injection) significant, but similar, reductions were observed in the levels insulin of both CD and VTD groups. After 2 month vanadium therapy, compared to CD group, the reduced insulin levels, seen in CD) was significantly increased insulin in VTD rats. However, at this stage the increased level of insulin seen in VTD was significantly lower than CN. 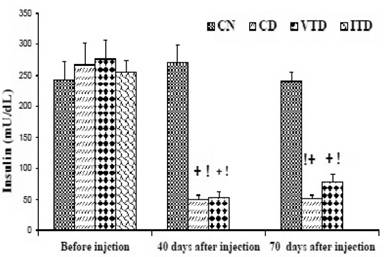 Figures 3 and 4 represent the photomicrographs of H/E and toluidine staining of the pancreatic tissues of normal and diabetic rats. The sections of the pancreatic tissues of normal rats showed regular islets with clustered of beta cells placed centrally (Figures 3-CN and 4-CN), whereas in CD rats the islets were degenerated, necrotic an atrophied and beta cells (Figures 3-CD and 4-CD), had pyknotic nuclei with dark eosinophilic cytoplasm. The islets in VTD, compared to CD, had less degenerated beta cells and in some cases they almost looked normal in size and well granulated beta cells (Figures 3-VTD and 4-VTD). The reduced high blood glucose in ITD apparently protected some of the damaged beta cells from glucotoxicity, but in general the shape of ITD islets were far away from VTN or CN groups (Figures 3-VTD and 4-VTD). Overall, most of the beta cells had pyknotic nucleoli with light hydropic degeneration and necrotic (Figures 3-ITD and 4-ITD). 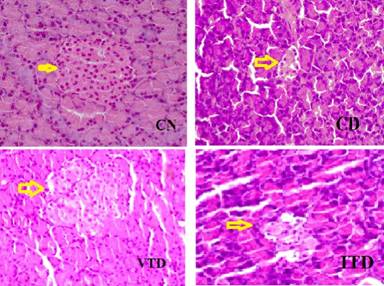 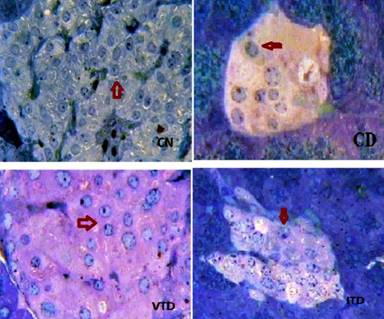 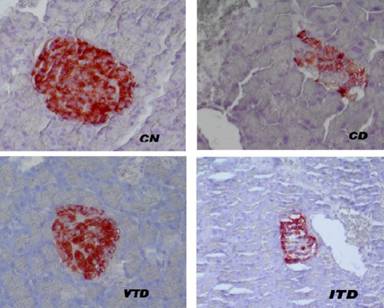 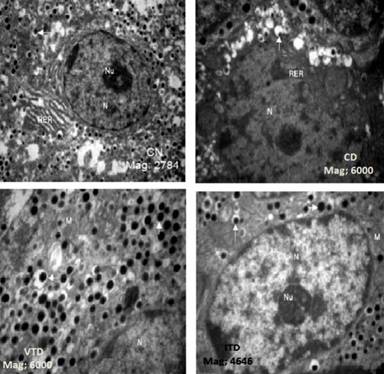 The electron micrograph of the pancreas of VTD, compared to CD, had proliferated beta cells with moderately increased and well organized nuclear structure as well as plentiful insulin secretory granules (Figure 6-VTD). In the beta cells mitochondria were not swollen and cytoplasmic regions were less vacuolated (Figure 6-VTD). Beta-cell nuclei were normal with finely distributed chromatin and distinct reticular nucleolus. The bilaminar nuclear membrane was distinct and had many pores. Some immature beta cells were present which had few central dense core insulin secretory granules with many Golgi complexes, and beta cells had round elongated mitochondria with distinct transverse cristae (Figure 6-VTD).

Treatment of diabetic rats with NPH insulin somehow protected beta cells from glucotoxicity usually happening with chronic hyperglycemia (Figure 6-ITD). In spite of the fact, seeing some improvements in the ITD islets, these improvements were far away from the islets of CN or VTD groups. In general terms the beta cells in ITD group were much smaller, some had pyknotic nucleoli with marginal hyperchromasia and light hydropic degeneration (Figure 6-ITD).

Our previous study showed that vanadium treatment could reverse diabetic symptoms in partial diabetic rats but failed in severe insulin dependent STZ diabetes animals [12, 18]. The severe diabetic rats needed a minimum amount of intraperitoneal insulin during vanadium treatment to induce normoglycemia but almost in all cases hyperglycemia reoccurred after vanadium or insulin withdrawal [12]. The result of the current study as well as previous reports indicated that vanadium treatment in partial diabetic rats can proliferate beta cells and reverse the signs and symptoms of moderate diabetes without any signs of recurrence of hyperglycemia after vanadium withdrawal [4, 11, 18, 19]. With respect to the presence of normal looking beta cells, abundant insulin secretory granules, and increased concentration of plasma insulin in VTD rats it would be reasonable to conclude besides the insulin mimetic action of vanadium its insulinotropic activity vanadium was the cause of elimination hyperglycemia during vanadium treatment or after withdrawal.

The precise mechanism of vanadium in reversing diabetes in diabetic animals is not clear. Even though vanadium affects the activity of many enzymes involved in the metabolic pathways and mimics the effect of insulin in the peripheral tissues [3, 15], these effects are not sufficient for preventing the reoccurrence of the diabetic symptoms. Compensatory cell regeneration can occur in partial diabetic rats but it cannot preserve normoglycemia in sever diabetic rats [12].

Beta cells have a limited proliferative capacity and cell regeneration can only occur if high blood glucose is reversed shortly after STZ injection [20]. There is some evidence for the presence of beta-cell recovery in the pancreatic islets of ITD rats, but the number, and ultrastructure of the recovered beta cells were far away from normal islet beta cells of CN and VTD rats. The increased number of immature granules and well-developed rough endoplasmic reticulum in the islet beta cells of VTD rats led us to propose a role for hyperfunction of the remaining beta cells independent of the alleviation of glucose toxicity happening during hyperglycemia. In this regard vanadium can reverse diabetic symptoms through potentiating the effect of insulin and proliferating normal functioning islet beta cells.

Vanadium treatment can lead to long term reversal of diabetic state in moderate diabetes. The insulin mimetic effects of vanadium make it a suitable element for amelioration of diabetic symptoms in type 2 diabetes which have enough endogenous insulin. The protective or regenerative role of vanadium is more likely independent of the relief of glucose toxicity.

Acknowledgment The authors are cordially appreciating the financial support (Grant No. 90-5600) of Vice Chancellor for Research of Shiraz University of Medical Sciences, Shiraz, Iran. Authors cordially appreciate the sincere assistance of Mr. Masood Monjazeb of Metabolism and Research Center of Nemazi Hospital for measuring plasma insulin