Pancreaticopleural Fistula as a Presentation of a Pancreatic Neoplasm. A Report of a Case and Review of the Literature

A 65-year-old gentleman presented with a history of worsening dyspnoea. A chest radiograph demonstrated a large left sided pleural effusion. A pleural drain was inserted and haemorrhagic pleural fluid was drained, which on cytological analysis contained benign inflammatory cells. Computed tomography (CT) of the thorax did not identify an underlying pulmonary lesion. However, the limited imaging of the left subphrenic region was suggestive of an inflammatory process in the region of the tail of the pancreas. The amylase level in a pleural fluid sample was found to be 23,225 IU/L suggestive of a pancreaticopleural fistula. A dedicated pancreatic protocol CT was thus performed (Figure 1). This demonstrated a small volume of rim enhancing fluid in the left upper quadrant tracking from the tail of the pancreas to the left hemidiaphragm, consistent with a pancreaticopleural fistula. Furthermore the main pancreatic duct was dilated with an abrupt cut off proximally at a 2.3 cm mass in the head of the pancreas, which was deemed surgically resectable by imaging criteria. A fine needle aspirate of the pancreatic mass was obtained under endoscopic ultrasound (EUS) guidance and yielded malignant cytology. Following a period of pre-operative optimization which included octreotide therapy and parenteral nutritional support, the patient underwent a pancreaticoduodenectomy. A histological diagnosis of pancreatic ductal adenocarcinoma was confirmed and a margin-negative resection was achieved. The post-operative period was unremarkable with full resolution of the pleural effusion. The patient is well and free of disease at the time of writing, six months postoperatively. 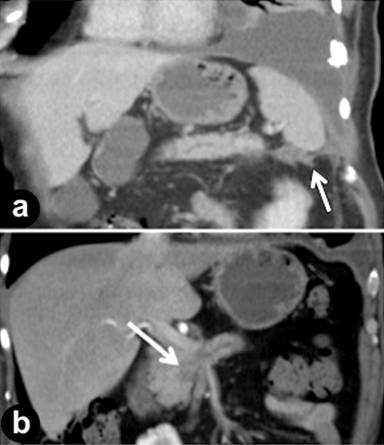 A focal pancreatic ductal disruption has been implicated in the initial pathogenesis of a pancreaticopleural fistula [6]. This leads to the development of a fistulous tract which may pass through the aortic or oesophageal hiatus or directly transdiaphragmatically [1] - as occurred in our case. The exact role, if any, of neoplastic lesions in the pathogenesis of pancreaticopleural fistulae is unclear. We postulate that main pancreatic ductal obstruction was a factor in our case. However given the paucity of existing data, no valid conclusions can be made. From our experience and review of the literature, we have two observations which may assist in the optimal management of this very rare patient group. Firstly; in the initial investigation of a patient presenting with a pancreaticopleural fistula, cross-sectional imaging of the pancreas is an appropriate measure in order to identify a possible underlying pancreatic neoplasm. Secondly; in both the aforementioned case and in the two previously reported cases, the associated pancreatic neoplasms were successfully treated with pancreatic resection.