Context Treatment of pancreatic fistulae after pancreaticoduodenectomy is extremely important because it determines the patient's postoperative course. In particular, treatment of grade B cases should be conducted in a timely manner to avoid deterioration to grade C. Objective We report the successful treatment of six cases of postoperative intractable, grade B pancreatic fistulae, in which fistula closure was achieved through the use of tissue adhesive. Methods Six subjects presented at our hospital with grade B pancreatic fistulae after pancreaticoduodenectomy. In all cases, the drain amylase values were high immediately after the operation, and the replacement of the drain was enforced. Closure of the fistula was performed by pouring tissue adhesive into the fistula from the drain, after the fistula had been straightened. Results Closure of the fistula was achieved in all six cases at the first attempt. The average fistula length was 13.2 cm, the average volume of pancreatic fluid discharge just before treatment was 63.3 mL, the average amylase value in the drainage was 40,338.5 IU/L, and the subjects were discharged from hospital an average of 8.8 days after treatment. There were no recurrences after treatment. Conclusion Intractable pancreatic fistulae can be effectively treated using the tissue adhesive method.

This report concerns six patients who underwent pancreaticoduodenectomy at our hospital between April 2007 and July 2013. All patients developed persistent postoperative pancreatic fistulae, which were classified as grade B according to the ISGPF definitions and underwent treatment using tissue adhesive. Among the six cases, there were two of pancreatic cancer, one of intraductal papillary mucinous neoplasm, one of a gastrointestinal stromal tumor of the duodenum, one of cancer of the ampulla of vater, and one of mixed-adenoneuroendocrine carcinoma of the pancreas. The reconstruction method of pancreaticoduodenectomy included one case of the pancreaticogastrostomy and five cases of the pancreaticojejunostomy. We performed the pancreaticogastrostomy by the invagination method. And we performed the pancreaticojejunostomy by duct and parenchyma-to-whole layer of jejunum anastomosis and full thickness pancreas-to-seromuscular jejunal anastomosis. Immediately after the operation, in all cases the amylase value of the pancreatic fluid drainage was high, and led to a diagnosis of pancreatic fistula.

For pancreatic fluid drainage, 19Fr of Braked Drain™ (ETHICON, Inc., USA) (Figure 1a) was used; it was replaced with a Nelaton catheter™ (NIPRO Co., Ltd., Japan) one week or more after the operation (Figure 1b). The 19Fr drain was initially replaced with a 16Fr-diameter drain, and then the diameter of the drain was gradually narrowed to 10Fr. In many cases, the postoperative volume of fluid drainage decreases gradually and drain removal will become possible. However, for our six cases drain removal was difficult due to persistent drainage of pancreatic fluid, and fistula closing was performed using tissue adhesive. 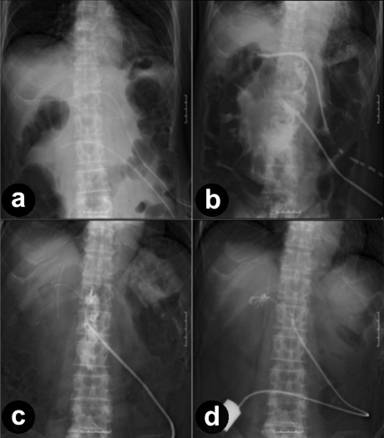 The six cases who underwent the treatment had remained in hospital for an average of 54.2±32.9 days post-pancreaticoduodenectomy until the fistulae were closed using this tissue adhesive method. The fistula closing could not be carried out whilst the cavity surrounding the pancreaticojejunostomy remained (Figure 1c). We injected fibrin glue from the drain which we narrowed to 10Fr, when the cavity had disappeared, and the fistula had been straightened (Figure 1d). Then the fistula closing could only be performed.

The results are summarized in Table 1. Successful closure of the fistula was achieved in all six cases at the first attempt. The average length of the treated fistulae was 13.2±5.1 cm. The average amylase value in the drainage just before treatment was 40,338.5±38,122.9 IU/L, and the volume of drainage averaged 63.3±20.8 mL. No cases of pancreatitis or abscess formation were found after treatment. Patients were discharged from hospital an average of 8.8±5.0 days after treatment for fistula closure (Table 1). We followed up the patients by CT every three months, but there were no cases of recurrence after treatment.

The pancreatic fistula grading defined by ISGPF [1] is widely accepted and many surgeons use it for diagnostic treatment. Among the treatment options, it is important to consider those aimed at grade B cases, where intensive therapeutic intervention will determine a patient's short-term prognosis. Failure of treatment for cases of grade B may lead to in-hospital death due to a shift to grade C. It may also lead to long-term hospitalization and make the social reintegration of the patient difficult.

For pancreatic fistula treatment using tissue adhesive, as performed here, we employed the method of directly injecting fibrin glue into the fistula. The successful closure of fistulae (vesicovaginal) using fibrin glue was first reported by Petterson [2]. However, we had also reported a case where fibrin glue, created from the autologous blood of the patient, was successful in fistula closure [9] and realized the efficacy of the method. Since these reports, the efficacy of this method has been proved in bronchial fistula, gastrointestinal fistula, and alimentary canal suture insufficiency, etc. [3-8]. Besides promoting early adhesion between tissues via the generated fibrin mass itself, the mechanism of fistula closure using fibrin glue is thought to stimulate penetration of the fibrin mass by fibroblasts. In turn, this series of actions will promote healing through the absorption of proteins, including fibronectin, and accelerate the production of collagen in the area of the wound [10].

All six cases of post-pancreaticoduodenectomy refractory fistulae, which we treated with tissue adhesive, responded well to treatment. Successful closure of the fistula was even achieved in a case where the volume of pancreatic juice discharge prior to treatment was 100 mL a day. Before we treated this patient, prolonged bed rest was required; after treatment, the patient was discharged from hospital within 8 days. Thus, this treatment was also considered to be effective in terms of shortening the length of hospital stay. We believe our results indicate that treatment of a pancreatic fistula using tissue adhesive is a simple and highly effective treatment.

The important thing for success with this treatment is that an angiographic examination of the gastrointestinal tract, including the pancreatic duct, is carried out before treatment. However, this method cannot be performed in cases where the alimentary canal side is completely closed or pancreaticojejunostomy is separated completely. After closing the fistula, it is important to make sure that pancreatic juices can flow unhindered into the digestive tract before starting any medical treatment. Moreover, it is important to consolidate the fistula. Complicated fistulae, where several fistulae have been produced, are difficult to treat. Moreover, medical treatment is difficult for those cases where a cavity has formed along the route of fistula. It is key to the success of this treatment method that the fistula is straightened from the pancreaticojejunostomy portion to the skin. Moreover, generally, longer fistulae are also thought to be cured easily [11], and in our case one of the reasons for successful treatment was considered to be that the fistula length was comparatively long, at an average of 13.2cm. It is thought that the post-operative retention position of the drain is an important consideration, as the method involved pouring the tissue adhesive into the fistula via the drainage route placed at the time of operation.

Fibrin glue created by autologous blood, which has been successfully used as a tissue adhesive, is excellent in terms of safety and from the point of view that it can be made in large volumes [9]. However, it takes time to produce and it is not easy to use in a clinical setting. Commercially produced tissue adhesive, with an established safety profile is now a readily available alternative and, because only 5 mL are needed for treatment in most cases, it seems unnecessary to create large volumes of fibrin glue from autologous blood.

Conflict of Interest There are no conflicts of interest to declare.