Intraductal Oncocytic Papillary Neoplasm of the Pancreas: A Case of a Second Neoplasm in a Pancreas Cancer Survivor

Cystic neoplasms (CN) entail a small group of exocrine pancreatic neoplasms (PN). Mucinous cystic neoplasms (MCN), 23%, and intraductal papillary mucinous neoplasms (IPMN), 38%, make up a majority of CN [1, 2]. MCN, unlike IPMN, are not associated with ductal growth and are usually multilocular in nature with ovarian type stroma [1]. Mucinous cystadenocarcinoma (MCA) is a type of MCN more commonly found in women [1]. Intraductal oncocytic papillary neoplasms (IOPN) of the pancreas, first described in 1996 as a separate entity [1], are the least common variant of IPMN. Some have debated that they should be differentiated entirely because of their distinct characteristics [3, 4]. Histologically, oncocytic cells are characteristic for IOPN and not found in other forms of IPMN. Also, IOPN are not usually associated with the Kirsten rat sarcoma viral oncogene homolog (KRAS) mutation as with other IPMN. In some ways, IOPN can be similar to MCN in that they both are more likely to be multilocular, larger in size, and can extend outside of the pancreas [1]. Some of these similarities and differences make classification of IOPN vague and their rare occurrence secondarily provides limited information about the disease process. We present the first case, to our knowledge, of a patient with IOPN occurring in a patient with a prior pancreatic neoplasm, specifically an MCN.

A fifty-two-year-old male presented with a 2-year history of epigastric abdominal pain radiating to his back with associated nausea and varying lengths of time. He had presented with similar symptoms to the emergency room one month prior, had abdominal imaging showing a lobulated cystic lesion in the tail of the pancreas, and was asked to follow up with his gastroenterologist. His past medical history was significant for alcohol and intravenous drug abuse, chronic pancreatitis, hepatitis C, uncontrolled diabetes, family history of pancreatic neoplasm, and personal history of MCN of the pancreas twelve years prior status post distal pancreatectomy and splenectomy. He has been seen in and out of the hospital for pancreatitis likely secondary to alcohol use and possibly triglycerides due to uncontrolled diabetes. On physical exam his vital signs were normal and he had epigastric tenderness. His amylase and lipase at the time of evaluation were normal. Contrast-enhanced computed tomography (CT) scan of abdomen/pelvis showed a lobulated cystic lesion in the distal pancreatic body measuring 4.5x6.5x5.8 cm (Figure 1). Endoscopic ultrasound (EUS) with fine-needle aspiration (FNA) showed a 7.5x5.1 cm septated cyst in the body of the pancreas with irregular walls and mural nodules shown within the cyst (Figure 2). Of note, there were at least 2 mural nodules within the cyst on EUS with the largest measuring 13x9.8 mm. Cyst fluid analysis showed an amylase level of 331 U/L and a CEA of 68.5 ng/mL. 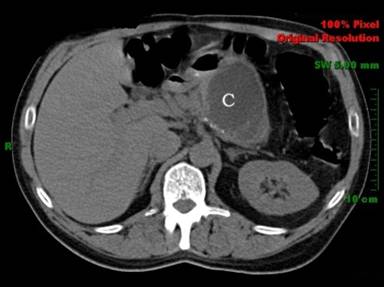 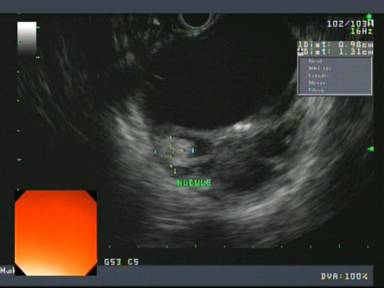 Given the presence of mural nodules, irregular cyst walls, and patient history of MCA, surgical resection was recommended. The patient underwent a partial pancreatectomy from the neck distally and partial gastrectomy. Pathology of the pancreatic mass was IOPN that was predominantly intraductal with extensive high grade dysplasia and mural granulation tissue reaction consistent with fistulous tract and seven reactive lymph nodes negative for malignancy with resection margins negative (Figure 3). The biopsies were also compared with the prior slides of the patient’s pancreatic neoplasm. The original diagnosis of MCA was confirmed. Additionally, the current diagnosis of IOPN was confirmed internally as well as by a national expert on gastrointestinal and pancreatic pathology at the Cleveland Clinic. The patient performed well after surgery and follow-up over the next six months only yielded some mild abdominal pain consistent with prior pancreatitis episodes. 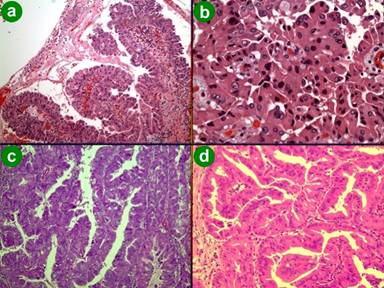 IOPN are a rare class of neoplasms of the pancreas classified under IPMN which themselves only compromise 5% of all pancreatic neoplasms [3]. Unfortunately, the rarity of IOPN results in only a few case reports and small series on which to understand its gross examination, histology, staining, and disease process. IOPN typically affects patients in their sixth decade of life with abdominal pain being the most frequent symptom. The majority of cases reported in the literature have been diagnosed as carcinomas, including reports of invasive growth and distant metastasis [5]. Grossly, IOPN exhibit mucin-filled cysts containing nodular papillary projections. Histologically, IOPN consist of complex arborizing papillary structures lined by oncocytic cells, and a cribriform pattern resulting from goblet cells and intra-cytoplasmic lumen [1, 5]. The cytoplasm of these cells stains diffusely with anti-mitochondrial antibodies and the oncocytic cells stain positively with phosphotungstic acid hematoxylin and Novelli stains [1].

IOPN is considered a distinctive pancreatic neoplasm that is usually intraductal but may develop into invasive carcinoma and should be treated with complete resection [5]. The presence of oncocytes is not thought to be the main deciding factor in determining malignant potential as other oncocytic neoplasms tend to be benign in other organs [4]. The degree of malignant potential for IOPNs is still unclear due to the scarce number of reports [4, 6].

Although IOPN share some similarities with the IPMN subgroup, there are some important distinctions. When compared to IPMN, IOPN are less frequently associated with weight loss, jaundice, invasion of blood vessels/nodal metastasis, and more frequently found at the origin in the main pancreatic duct, have a high-grade dysplasia, larger size, and some features of focal acinar differentiation [5]. The oncocytic cells and relative lack of a KRAS mutation distinguish IOPN from other IPMN [5]. Similarities between IPMN and IOPN include onset roughly in the sixth decade of life and common location within the pancreatic head [1, 4, 5]. In our case, the growth within the pancreatic body may be unique and related to MCN which was the location of the previous MCN of the patient. MCN and IOPN are also more likely to be multilocular, larger in size, and can extend outside of the pancreas [1].

The importance of these relations is highlighted by our case because it was the first incident to our knowledge where IOPN developed following a prior pancreatic neoplasm, specifically a MCA. This may suggest some links between the MCN group and IOPN; however, there were no pathologic features to suggest an association between IOPN and this patient’s previous neoplasm. Of cases we were able to find, most either do not mention prior history of cancer or are prior cancers documented in the individual reports [1, 3-7]. In a case series by Liska et al. 28 cases of pancreatic IOPN were analysed without mention of prior pancreatic cancer history. Also in the case series, as in our case, pancreatitis (4 out of 28) and diabetes (5 out of 28) may be seen in patients developing IOPN [5].

In conclusion, with the rare nature of IOPN, having only a few case reports and small series on which to understand its disease process, it is imperative to discuss each case and detail possible correlations with other pancreatic cystic neoplasms as well as distinctions from its current group of IPMN. Further studies are still needed to clarify the biology of IOPN and to establish their position in clinicopathologic classifications of pancreatic tumors [4-6]. This case assists in the understanding of IOPN and may influence further research comparing progression of these diseases and their relationship with other cystic neoplasms.

Conflict of Interest Authors declare to have no conflict of interest.