Multimodality Treatment by FOLFOX plus HIFU in a Case of Advanced Pancreatic Carcinoma. A Case Report

Context Pancreatic cancer is one of the most aggressive malignant diseases in which the survival rate has not improved in the past 40 years. Case report A fifty-one-year-old male patient with inoperable metastatic pancreatic cancer and low response to chemotherapy with gemcitabine as single therapy underwent palliative high intensity focused ultrasound (HIFU) ablation. Continuing chemotherapy with folinic acid, oxaliplatin and 5-fluorouracil (FOLFOX) was made. Tools, provided by the European Organization for Research and Treatment of Cancer (EORTC) were used to evaluate his quality of life. The Global Health Status improved from 25 to 42 out of 100 and the body mass index (BMI) increased from 14.9 to 18.1 kg/m2. Measured by the visual analog scale, the pain was reduced from 7 to 2 out of 10. Twelve months after the HIFU ablation, CT revealed decreased size of the tumor and liver lesions. Conclusion FOLFOX plus interventional, physical destruction of the primary tumor by HIFU sufficiently improved the quality of life, reduced pancreatic pain and provided better survival in this case.

Pancreatic cancer (PC) is one of the most aggressive malignant diseases which survival rate has not improved in the past 40 years. The most common type of pancreatic cancer is adenocarcinoma of the pancreas (85% of the cases) and it is the fourth leading cause of cancer-related deaths, both in men and women, worldwide [1].

The curative treatment at present is a radical surgical resection but only 15% to 20% of the patients are suitable for such a resection at the time of diagnosis and even these patients have poor outcome profile with only up to 30% of achieving 5-year survival [1, 2]. About 80% of patients are already locally advanced or systemically advanced cases at diagnosis. The median survival in these groups is about 10 and 6 months, respectively [1].

Severe pain and rapid loss of weight are common symptoms in around 73% of PC patients. In order to relieve the symptoms and provide better quality of life, palliative procedures and chemotherapy are usually offered to patients who are not appropriate for curative surgery. After the approval and introduction of gemcitabine into the practice 15 years ago, the prognosis for these patients has slightly improved. Still gemcitabine is effective in only around 23.8% of the patients [3]. Newer and more promising regimens containing 5-fluorouracil (5-FU) are under investigation. Such are FOLFIRINOX (folinic acid, oxaliplatin, 5-fluorouracil and irinotecan), associated with significant increase of the toxicities and FOLFOX (folinic acid, oxaliplatin and 5-fluorouracil), preferred for patients with aggravated general condition [4, 5]. The median overall survival of patients, however, remains from 2 to 6 months [6]. The low response rates to chemotherapy and poor survival benefit suggest that techniques for physical destruction of the tumor may have advantages. During the last decade, high intensity focused ultrasound (HIFU) has been introduced as an innovative non-invasive method for thermal ablation of benign and malignant solid tumors. The concept of HIFU, used for medical purposes, has been around for more than 70 years, but clinically approved medical devices using MRI- or US (ultrasound) – guidance have only been introduced in the last 15 years [7].

A high intensity ultrasound beam is generated and focused by a special transducer in the target zone of the tumor, which could be as small as a few millimeters. This leads to accurately controlled localized heating at the point of focus. HIFU ablates the tumor, but leaves surrounding tissues and organs intact. In the last years a number of studies have stated that HIFU can successfully and safely be used as a pain control method in PC patients [7, 8]. A recent study also reveals encouraging results for the overall survival of PC patients after HIFU treatment, which in some cases can reach as long as 12.4 months from initial PC diagnosis [9].

A forty-eight-year-old, male patient with significant weight loss and dyspepsia underwent diagnostic CT scan in July 2011 which revealed a tumor mass in the body of the pancreas. The tumor was histologically verified as an adenocarcinoma. It was inoperable at the time of diagnosis due to infiltration of the hepatic artery, the splenic artery and the superior mesenteric artery (Figure 1). A cycle of combined chemotherapy applications started in August 2011 and continued to December 2012. Gemcitabine (1,600 mg/m2 i.v. weekly) plus ambulatory (Erlotinib 100 mg/day p.o.) were administered in these seventeen months. Control CT scans and the evaluation of the tumor-response showed stabilization of the disease during this period. 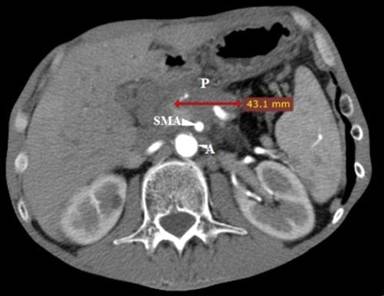 In January 2013 a new FOLFOX4 combination therapy was prescribed after a multidisciplinary team meeting (MDT) due to significant progression of the pathological process on control CT and poor general condition of the patient. The tumor volume had increased and 4 newly discovered hypodense lesions with different size were identified in the liver (Figure 2a).

A follow-up CT scan two months later revealed a new progression of the disease with increases in both the size and the number of metastatic liver lesions. The pancreatic tumor had infiltrated the superior mesenteric artery and showed slight volume increase (Figure 2b and Figure 3). 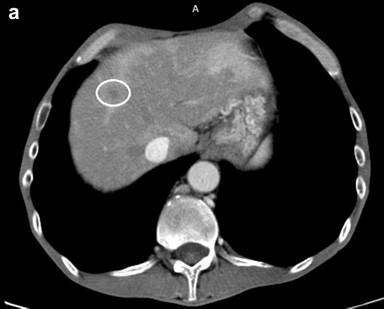 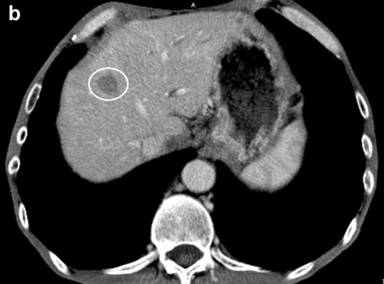 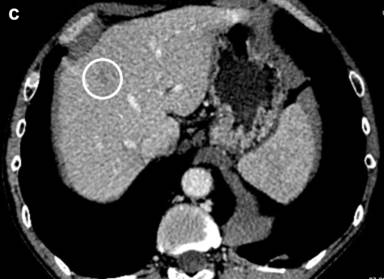 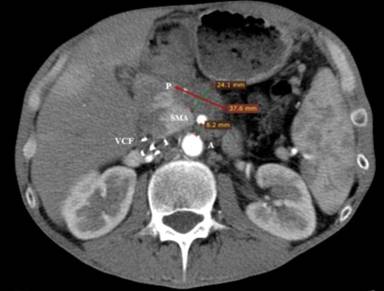 On 21st of March, 2013, the patient visited the Specialized Clinical Center for non-invasive treatment with HIFU, with abdominal pain, measured 7 out of 10 points on the visual analog scale, and was given non-opioid pain medication. He had already received 2 courses of FOLFOX therapy. CT data for thrombosis of the inferior vena cava was found and permanent VCF was placed (Figure 3).The patient was considered suitable for HIFU ablation with an intended palliative outcome.

The tools, validated and provided by the European Organization for the Research and Treatment of Cancer (EORTC) QLQ-C30 and QLQ-Pan26, were used to evaluate the quality of life of the patient before the ablation.

The patient’s answers showed poor (25 points) Global Health Status (GHS) and moderate (50 points) pancreatic pain before treatment. At that time the patient’s BMI was 14.9 kg/m2. The HIFU ablation was performed with Model JC therapeutic system (Chongqing Haifu Medical Technology Co. Ltd., China) under sedation in prone position for 2 hours with 752 seconds real ablation time and mean energy of the beam of 103 W. The first hyper echogenic changes appeared after 150 seconds as ultrasound (US) signs of coagulative necrosis. Immediately after the ablation the hyper echogenic changes were observed in the whole tumor mass (Figure 4). The patient was discharged from the hospital after 4 days in a good general condition with no clinical, laboratory or imaging data of complications. The patient continued the FOLFOX4 treatment for a total of 10 courses before and after HIFU.

The control CT scan two months after the HIFU procedure confirmed coagulative necrosis with no contrast enhancement of the primary tumor with mean size of the longest diameter 32 mm (Figure 5). The patient’s GHS improved to 33, and his pancreatic pain decreased to 42. At the sixth month of follow-up after the HIFU ablation his GHS improved to 42 and the pancreatic pain was significantly reduced to 17. According to the VAS, the pancreatic pain was reduced from 7 before HIFU to 2 out of 10. The digestive symptoms improved from 50 before to 0 and the bowel habits from 67 to 33. In this period the BMI increased from 14.9 to 18.1 kg/m2. 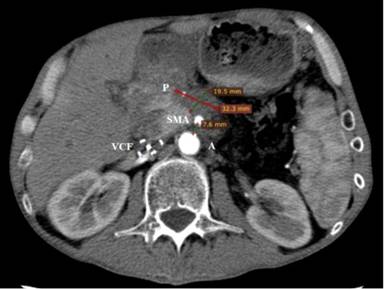 Twelve months after the HIFU ablation, CT revealed a decreased tumor size to 18 mm (Figure 6). An objective anatomical landmark, confirming the shrinkage of the formation during the patient follow-up was the distance between the aorta and the superior mesenteric artery. Before HIFU ablation the distance was 8.2 mm, and 12 months later it reached 23 mm (Figures 3 and 6). The control CT also showed remarkable reduction of the liver metastases (Figure 2c). The quality of life evaluated by the same EORTC instruments remained stable. 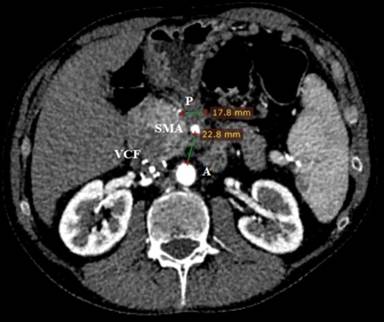 The CA 19-9 remained in the reference ranges before HIFU ablation and during the whole follow-up.

The EORTC QLQ-C30 is a common tool for all cancer patients. It consists of a global health status/QoL-score, five function scales (physical, role, social, emotional and cognitive functions), three symptom scales (fatigue, pain, nausea), and five single items (dyspnea, insomnia, appetite loss, constipation, diarrhea). The QLQ-Pan26 is specific for the pancreatic cancer patient. Each item of the two tools has four response alternatives: 1, “not at all”; 2, “a little”; 3, “quite a bit”; and 4, “very much”. The two items of the global health-status (GHS) scale have response options ranging from 1 (“very poor”) to 7 (“excellent”). All scores were transformed linearly so that all scales ranged from 0 to 100. In the function scales and GHS scale higher scores represent a better level of functioning. Concerning the symptoms, higher scores mark a higher level of symptomatology [10].

The patient was evaluated at a high risk of venous thromboembolism during the following HIFU procedure due to the advanced oncological disease and chemotherapy [11]. He received VCF and current prophylaxis in accordance to the present guidelines concerning VCF [12]. Our decision was also supported by a previous case of cavernous vein thrombosis after HIFU ablation in PC, described in the literature [8].

He underwent HIFU ablation of the primary tumor in only one session. Extremely low mean energy of 103 W was used for about 750 sec real ablation time. Possible explanation for the earlier effect and low energy during HIFU ablation is the very close distance between the deepest layer of the tumor and the skin surface which is only 5.5 cm.

There is not yet a single treatment modality that can sufficiently improve the quality of life, reduce pancreatic pain and provide better survival on its own. However, in our case multimodalities – interventional, physical destruction of primary tumor by HIFU and systemic chemotherapy together, affect all the three aspects. The explanation for these changes could be other unknown regulatory and immunological factors, which result from the processes occurring in the primary tumor after HIFU ablation as there, have been reports that demonstrated significant increase in CD4+ population, as well as normalization of CD4+/CD8+ ratio in patients with various solid tumors [13]. This improved immune response is probably due to the exposure of more antigens in the tumor.

Up to this moment a small group of PC patients (about 300) has been treated with HIFU [14]. Cases like the one presented are an example of the benefits of this promising new multimodality approach of treatment. The patient is still alive at the time of the case report (September 2014), with good quality of life without data for progression of the disease. Prospective and randomized trials are needed to better determine the indications for HIFU ablation, long term results and therapeutic approaches combined with or without chemotherapy.

Conflict of Interest Authors declare to have no conflict of interest.