Surgical Intervention for Mediastinal Pancreatic Pseudocysts. A Case Series and Review of the Literature

A thirty-seven-year-old gentleman was under follow up at a district general hospital within our catchment area for multiple admissions with alcoholic pancreatitis and resulting intra-abdominal pancreatic pseudocysts. He had two endoscopic ultrasound (EUS)-guided stent insertions for drainage of these pseudocysts, fluid analysis from which confirmed these as pseudocysts with no evidence of malignancy.

During his most recent admission, a computed tomography (CT) scan showed a large retroperitoneal collection and another enlarging pancreatic pseudocyst, this time extending into the mediastinum and not amenable to EUS-guided drainage. A percutaneous drain was inserted under ultrasound (USS) scan guidance which drained brown fluid on insertion. This temporarily drained the cyst and relieved his discomfort but the cyst was found to have reformed subsequently. An endoscopic retrograde cholangiopancreatogram (ERCP) was therefore performed to assess the integrity of the pancreatic duct. Contrast injection during ERCP showed early filling of a pancreatic pseudocyst extending into the mediastinum and another large left retroperitoneal pseudocyst, with complete disruption of the pancreatic duct. The calibre of the duct was normal; however, there was a fracture across the pancreatic duct and contrast extravasated to fill the two pseudocysts. A 9 cm stent was inserted into the pancreatic duct during ERCP. Following this the patient developed increasing abdominal pain and pyrexia. A repeat CT scan showed the presence of both intra-abdominal and intra-thoracic loculated pseudocysts despite percutaneous and transpapillary drain insertion. The pseudocysts extended from the left upper quadrant to just behind the left kidney and into the left iliac fossa, and passed through the gastro-oesophageal junction and above the diaphragm.

Following this he was transferred to our regional hepatopancreatobiliary surgery unit for operative management of his pseudocysts. On admission he described epigastric and left upper quadrant pain. He was tender in these areas on palpation, but the examination was otherwise unremarkable. His blood tests on admission showed a white cell count of 14.0, haemoglobin of 94, C-reactive protein (CRP) of more than 250, amylase of 141, bilirubin of 9, alkaline phosphatase (ALP) of 505 and alanine transaminase (ALT) of 30. His urea and electrolytes were unremarkable. A repeat CT scan showed multiple loculated collections extending from the left upper quadrant to just behind the left kidney and further collections extending into the left iliac fossa (Figure 1). The largest pseudocyst was shown to be passing the gastro-oesophageal junction and extending above the diaphragm. These pseudocysts seemed to be connected. It was decided to perform a cystogastrostomy and cystojejunostomy. The pancreatic pseudocyst posterior to the stomach was delineated by intraoperative ultrasound. A midline laparotomy was performed, the pancreatic pseudocyst was palpated behind stomach and again localised with intraoperative ultrasound. A longitudinal incision was made along the anterior wall of the stomach and cyst location was confirmed by aspiration of clear pancreatic fluid. The pseudocyst drained altogether 300-500 mL clear fluid which was sent for culture and biochemistry. A cystogastrostomy was performed. The position of the large, left retroperitoneal pseudocyst behind the left kidney was also located using intraoperative ultrasound and was found to be extending into the left iliac fossa. The cyst was aspirated yielding thick pus and a cystojejunostomy was fashioned onto a 70 cm Roux-en-Y loop. 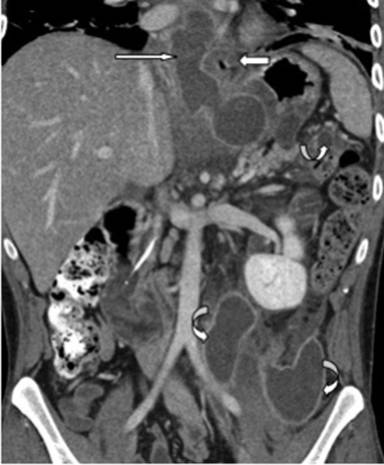 He had an uneventful recovery and was discharged one week following surgery with resolution of his symptoms. Follow up appointments have not been attended to date however a follow up CT scan is being arranged.

A twenty-two-year-old female with a history of alcohol-induced chronic pancreatitis was admitted with abdominal pain and dysphagia. On examination she had a midline laparotomy scar from previous abdominal surgery and marked tenderness in the epigastric area on palpation but the examination was otherwise unremarkable. Her blood tests revealed a white cell count of 14.0, haemoglobin of 11.7, platelets of 458, CRP of 4, amylase of 279, albumin of 39, bilirubin of 10, ALP of 93 and ALT of 21. Her urea and electrolytes were unremarkable. A CT scan performed during this admission revealed a large cyst arising from the body and tail of the pancreas extending posteriorly to the stomach and tracking behind the oesophagus and into the mediastinum (Figures 2 and 3). Cyst fluid aspirated under EUS guidance yielded an amylase level of 20,000 confirming this to be a pancreatic pseudocyst. The EUS also showed calcification in the pancreas in keeping with chronic pancreatitis. Although aspiration provided temporary resolution of her symptoms, the patient experienced recurrence of pain and discomfort. At laparotomy a retrogastric pseudocyst communicating with the mediastinum was clearly identified on intraoperative ultrasound scan. An anterior gastrostomy was performed and intraoperative ultrasound was again used to locate the pseudocyst. A posterior wall gastrostomy was created to enter the cyst and the cyst wall was sent for histology. Intraoperative contrast study confirmed the communication with the mediastinal cavity. A surgical cystogastrostomy and a feeding jejunostomy were performed. The patient had an uneventful recovery. 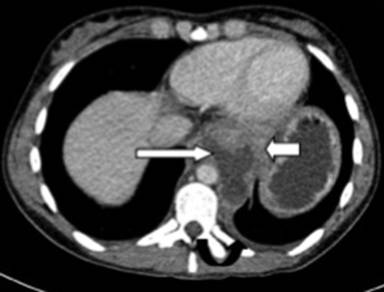 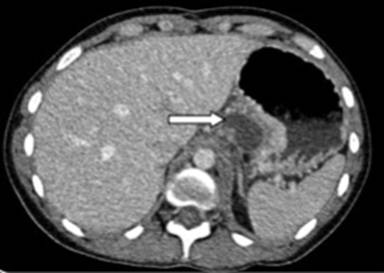 The cyst had completely resolved on follow-up CT imaging 3 months later and a further CT scan eight years after the procedure showed no new collections.

Mediastinal pancreatic pseudocysts are a rare complication of acute and chronic pancreatitis. The commonest cause of pancreatitis in these cases is alcohol in adults and trauma in children [1]. Mediastinal extension of the pseudocyst should be suspected in patients with pancreatitis who experience upper gastrointestinal symptoms such as dysphagia or respiratory symptoms such as breathlessness or pleuritic chest pain [2-5]. Various management options have been described including conservative treatment with somatostatin analogues and total parenteral nutrition [6], endoscopically guided procedures [3-5, 7-11] , thoracoscopic drainage with video-assisted thoracoscopic surgery [12] or surgical management, as described in this instance and by several other authors, with a cystogastrostomy and/or cystojejunostomy [2, 13-16]. There is currently no consensus on what the most appropriate first line of management should be.

Not all pancreatic pseudocysts require active management. Indications for intervention include pseudocysts associated with chronic (and not acute) pancreatitis as these are less likely to regress spontaneously, symptoms, and those exceeding 6cm in diameter [17]. Complications such as compression of large vessels, haemorrhage into the pseudocyst, infection or pancreaticopleural fistulae are further indications for intervention [18].

With the obvious advantages to the patient such as shorter hospital stay and often the option of avoiding a general anaesthetic, EUS guided drainage is being used more commonly as the first line of treatment of mediastinal pancreatic pseudocysts. However, our cases described above suggest that surgery may sometimes be required to provide definitive management of mediastinal pancreatic pseudocysts following failure of endoscopic drainage. The relative rarity of mediastinal pseudocysts renders it difficult to characterize specific indications to recommend surgery as the first line of management. It is however worth considering surgery in the first instance where endoscopic procedures are thought to have a high risk of failure, as surgery would provide a higher success rate whilst avoiding the potential complications from endoscopic procedures.