Context Wandering spleen is a rare medical entity in which the spleen is orphaned of its usual peritoneal attachments and thus assumes an ever wandering and hypermobile state. This laxity of attachments may even cause torsion of the splenic pedicle. Both gastric volvulus and wandering spleen share a common embryology owing to maldevelopment of the dorsal mesentery. Gastric volvulus complicating a wandering spleen is, however, an extremely unusual association, with a few cases described in literature. Case report We report a case of a young female who presented with acute abdominal pain and vomiting. Radiological imaging revealed an intrathoracic gastric volvulus, torsion in an ectopic spleen, and additionally demonstrated a pancreatic volvulus - an unusual triad, reported only once, causing an acute abdomen. The patient subsequently underwent an emergency surgical laparotomy with splenopexy and gastropexy. Conclusion Imaging is a must for definitive diagnosis of wandering spleen and the associated pathologic conditions. Besides, a prompt surgical management circumvents inadvertent outcomes.

Wandering spleen, a medical enigma, is a rarity. Even though gastric volvulus and wandering spleen share a common embryological basis; cases of such an association have rarely been described. We report an extremely unusual triad of a pancreatic volvulus, wandering spleen with torsion and intrathoracic gastric volvulus as a cause of acute abdominal pain. To the best of our knowledge, this is only the second such case reported in literature. Besides the novelty of this case, we also highlight the importance of radiological imaging studies in definitive diagnosis and the need for prompt surgical intervention to avoid inadvertent outcomes.

A fourteen years female presented with 2 days’ history of colicky pain in the epigastrium, nausea and multiple episodes of bilious vomiting. Her past medical history was unremarkable. The patient was febrile (102 ˚F); her BP was 114/64 mm Hg and general examination revealed tachycardia (110/min) and tachypnoea (30/min). On abdominal examination, the abdomen was scaphoid with generalised abdominal tenderness. A lump could be demonstrated in the umbilical region on deep palpation. Auscultation of chest disclosed an occasional borborgymus on left side.

Laboratory investigations showed the patient to be anaemic (Hb 9 gm%) with leucocytosis (16,000/cubic mm) and a predominance of polymorphonuclear cells (80%). Scanogram revealed a dilated stomach with inverse orientation as evidenced by the position of the Ryle’s tube (Figure 1). A screening abdominal ultrasound failed to demonstrate the spleen in the left hypochondrium. The spleen was present in the umbilical region and extended into the left lumbar region. The bowel loops occupied the left upper quadrant. A contrast enhanced computed tomography (CECT scan) of the chest and abdomen was performed. It depicted a grossly distended stomach with the fundus lying in the left hemi-thorax and an air-fluid level within (Figure 2). The pylorus lay close but a little above the gastro-oesophageal junction, a finding consistent with gastric volvulus (Figure 3). There were no accompanying signs of gastric infarction. An enlarged spleen was visualised occupying the umbilical and the left lumbar region, extending along the undersurface of the left lobe of the liver and reaching below the lower pole of the left kidney (Figures 4, 5). The splenic pedicle had undergone torsion with consequent volvulus of pancreatic tissue. The splenic parenchyma however, had a homogenous attenuation, thus excluding any splenic ischemia. The pancreas was seen compressed between the stomach and the spleen (Figures 3, 5). A diagnosis of pancreatic volvulus due to torsion of wandering spleen, diaphragmatic hernia with an intra-thoracic gastric volvulus and resultant gastric outlet obstruction was thus established. 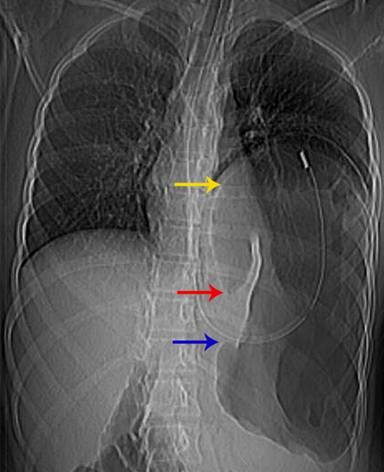 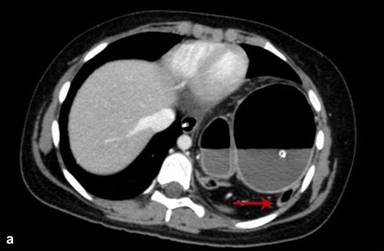 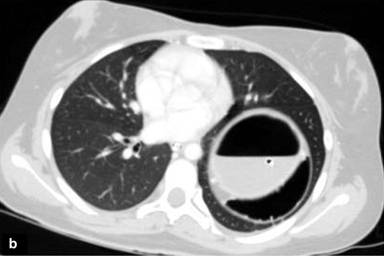 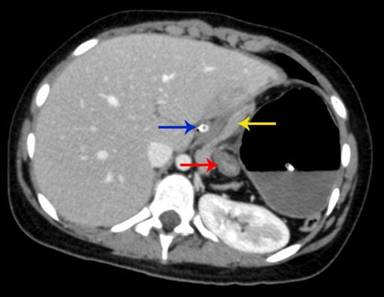 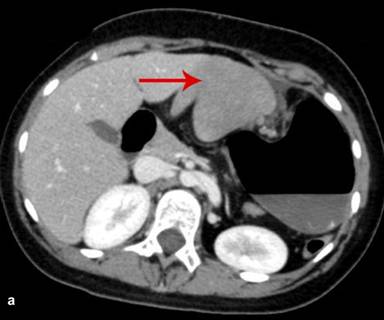 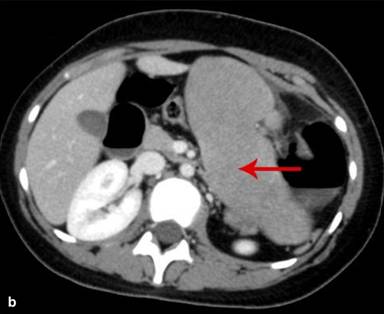 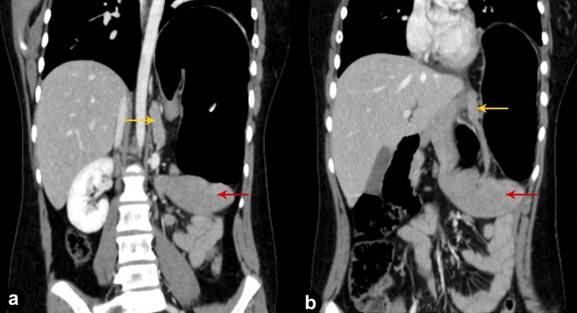 The stomach was decompressed using a Ryle’s tube. An emergency open laparotomy was performed which showed the stomach to be rotated in mesenteroaxial plane and confirmed the presence of the torsion in wandering spleen. No evidence of splenic or gastric infarction was noted. Derotation of the stomach, pancreas and spleen was performed. The diaphragmatic defect was repaired and gastropexy and splenopexy was performed.

The patient had uneventful post-operative course in the ward. Currently, she has been asked to follow up on an outpatient basis.

The splenic tissue begins its development in the 5th week of gestation as a mass of mesenchymal cells supported within the dorsal mesentery. As the spleen migrates to assume its normal anatomical position, it establishes its peritoneal attachments with the left kidney and stomach through the linorenal and gastrosplenic ligaments, respectively [1]. These ligaments act as a chaperon and restrict any mobility of the spleen. Congenital absence, laxity or elongation of these suspensory splenic ligaments result in a hypermobile spleen known as a wandering or floating spleen or splenic ptosis. Wandering spleen, first described by Jozef Dietl in 1854 [2], is an extremely rare clinical entity with an incidence of less than 0.2% of cases undergoing splenectomy [3]. Only 500 cases of such an entity have been reported in literature [2]. Acquired wandering spleen is seen in women due to laxity of the suspensory splenic ligaments following pregnancy, while congenital cases occur due to developmental abnormalities of the dorsal mesogastrium [4].

Gastric volvulus is thought to occur secondary to laxity of the gastric suspensory ligaments (gastrohepatic, gastrosplenic, gastroduodenal, and gastrophrenic) [5] causing approximation of the cardiac and pyloric ends.

As evident, both wandering spleen and gastric volvulus share a common etiopathogenesis – laxity of the intraperitoneal visceral ligaments [3-5]. However, occurrence of both in the same patient is uncommon.

The clinical presentation of wandering spleen is variable. It may be diagnosed incidentally on a routine abdominal screening or the patient may present with an acute abdomen due to acute torsion of the splenic pedicle with splenic ischemia/infarction [6, 7].

Pancreatic volvulus is itself a rare entity with few cases described in conjunction with a wandering spleen [3]. The pancreatic tissue gets twisted in the splenorenal ligament during splenic torsion. The patient may develop acute pancreatitis either because of ischemia or folding of the duct [3].

Radiological imaging plays a central role in the diagnosis of wandering spleen and computed tomography is the preferred modality [6]. CT shows absent splenic tissue in the normal anatomical position as well as its lower abdominal or pelvic position [6]. Moreover, it can also diagnose splenic infarction and associated anomalies like pancreatic and gastric volvulus-as seen in our case.

Gastric volvulus accompanying wandering spleen is a rarity with very few cases documented [4, 5]. To the best of our knowledge, the unusual triad of pancreatic volvulus, wandering spleen with torsion and gastric volvulus has been documented in literature only once before [3]. We thus add to the existing literature. Moreover, we highlight the importance of imaging studies in establishing a diagnosis and the need for emergent surgical action.