Context Brunner’s gland adenoma is a rare benign duodenal neoplasm. It usually presents with luminal obstruction or gastrointestinal bleeding. In rare cases, it may mimic a pancreatic malignancy and may present with obstructive jaundice. Case report A 65-year-old female presented with a two-month history of abdominal pain, early satiety and retrosternal burning pain. Liver function tests showed elevated enzymes with normal bilirubin. Imaging studies revealed a large mass in relation to the uncinate process of the pancreas and the distal duodenum along with the dilated common bile duct and the main pancreatic duct. Initial endoscopic evaluation failed to make a correct diagnosis. Repeat endoscopic evaluation combined with endoscopic sonography, however, revealed a large polypoid mass arising from the duodenal bulb. The patient underwent a transduodenal polypectomy. A diagnosis of Brunner’s gland adenoma was made on histopathological examination. Conclusion Giant Brunner’s adenoma may have unusual presentations. It may present with the features of ampullary obstruction mimicking periampullary or pancreatic malignancies. Extensive preoperative evaluation is required to reach a correct diagnosis in order to avoid more extensive surgery.

Benign tumors of the duodenum are rare. Brunner’s gland adenoma, also known as brunneroma or Brunner’s gland hamartoma constitutes only 10.6% of these tumors [1]. In the literature, only 150 cases of Brunner’s gland adenoma have been reported to date [2]. Most of these adenomas are small and asymptomatic, and are found incidentally during endoscopy. The large or giant variety is uncommon and may present with problems related to their size or location. When symptomatic, they usually present with intestinal obstruction or gastrointestinal bleeding [3]. In rare cases, these giant adenomas may simulate pancreatic or duodenal malignancy, leading to a diagnostic and therapeutic challenge regarding their management [4].

We herein describe a case of giant Brunner’s gland adenoma arising from the duodenal bulb which presented as a malignancy of the uncinate process of the pancreas along with duodenal and ampullary obstruction.

Abdominal ultrasonography showed a distended gallbladder without any calculi, prominent intrahepatic biliary radicals, a (10 mm) common bile duct dilated to the lower end with no calculi, prominent main pancreatic duct and a 2.8x1.9 cm hypoechoic mass near the distal end of the common bile duct. An abdominal computed tomography (CT) scan confirmed the dilatation of the common bile duct and the main pancreatic duct, and revealed an ill-defined hypodense mass 6.5x5.5 cm in size arising from the uncinate process of the pancreas (Figure 1). The mass involved the duodenum with an extension to the duodenojejunal flexure. The proximal duodenum was found to be dilated. The CT scan suggested the diagnosis of a pancreatic mass with duodenal infiltration. Upper gastrointestinal endoscopy was performed showing esophagitis and extraneous compression in the duodenal bulb. A side view endoscopy was performed and showed a long pedicle-like structure extending from the duodenal bulb into the distal duodenum along the medial wall of the second part of the duodenum (Figure 2). The distal end of this structure, the ampulla and the distal duodenal lumen could not be visualized. An attempt was made to pull the distal end of the structure using biopsy forceps but without success. Besides these findings, no ulcers, strictures or growths were found in the duodenum. In view of the endoscopic findings, the CT scan was again reviewed. The mass initially described as originating from the uncinate process was suspected to be intraluminal within the distal duodenum with a smooth outline at the distal end. However, this mass could not be defined as separate from the pancreas. In addition, a characteristic sign of “duodenal wall invagination” was observed in the dilated first part of the duodenum (Figure 3). Barium meal examination of the upper digestive tract showed a well defined smooth lobular filling defect in the dilated first part of the duodenum (Figure 4). Given the above findings, a duodenal polypoid mass of unknown nature was suspected. A side view endoscopy was repeated and endoscopic ultrasonography (EUS) was also performed. During this examination, a large polypoid mass with normal overlying mucosa was seen in the proximal duodenum (Figure 5a). The ampulla was seen as separate from the polyp and was found to be normal as was the visualized distal duodenum (Figure 5b). Endoscopic ultrasonography revealed a homogenous echogenic mass occupying the submucosa in the duodenal bulb with a normal pancreas which was not involved by the mass (Figure 5c). A biopsy taken from the polyp showed non-specific changes in the mucosa. 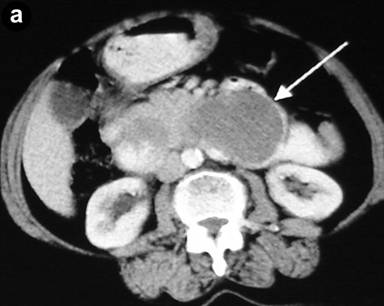 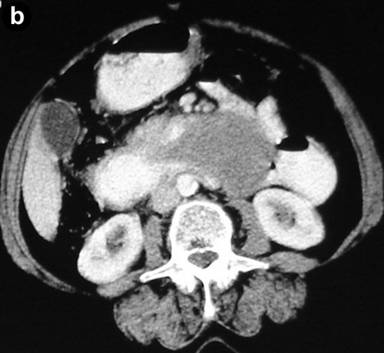 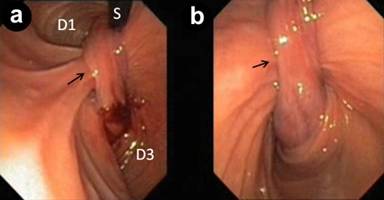 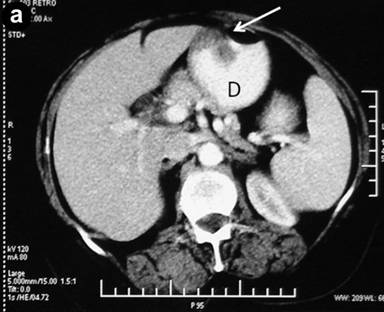 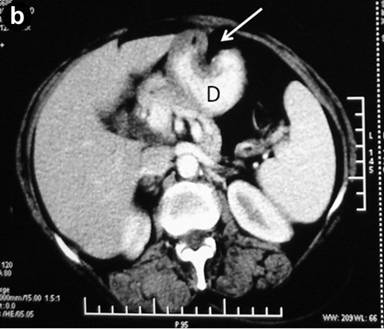 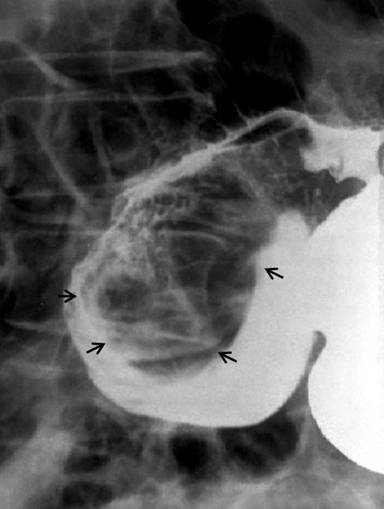 At laparotomy, the duodenum was found to be dilated as far as the third part with a polypoid mass palpated in the proximal duodenum. A duodenotomy at the junction of the first and second parts of the duodenum revealed a large, firm, pedunculated polyp with normal overlying mucosa arising from the posterosuperior aspect of the duodenal bulb (Figure 6a). The pancreas and the duodenum were found to be normal. A transduodenal polypectomy was performed. On gross examination, a 6x5x3 cm large, firm, polypoid mass was observed with multiple tiny dimple-like depressions in the overlying mucosa oozing thick mucoid secretion, and having a solid lobulated pattern on cut section (Figure 6b). Histopathological examination revealed the presence of hyperplastic Brunner’s glands arranged in a lobulated pattern with intervening fibrous septa, suggesting a diagnosis of Brunner’s gland adenoma. There was no evidence of malignancy in this adenoma. The postoperative period was uneventful and she is well after a two year follow-up with normalization of the liver enzymes and resolution of the dilated biliary and pancreatic ductal systems on ultrasonography.

Brunner’s gland adenoma arises from Brunner’s glands which are located in the deep mucosa and submucosa of the duodenum. As these glands are found predominantly in the proximal duodenum, Brunner’s gland adenomas usually (57-70%) develop in the duodenal bulb [3, 5]. They most commonly occur in the fifth and sixth decades of life with no sex predominance. Development of these lesions may be related to chronic renal failure [6], chronic pancreatitis [7], peptic ulcer disease [8] or Helicobacter pylori infection [9].

They are usually asymptomatic and are discovered incidentally during endoscopy. Symptomatic cases most commonly present with gastrointestinal bleeding and obstruction [3]. Bleeding is often chronic and may be manifested as chronic anemia. Obstructive symptoms usually occur when they are larger than 2 cm [10]. Brunner’s gland adenoma may present with gastric outlet obstruction [11], duodenal obstruction, as in our case, or occasionally with the intussusception of the duodenal wall [12, 13, 14, 15]. The present case had chronic intermittent duodenal obstruction at the duodenojejunal flexure due to the intermittent prolapse of the polyp. This was evidenced by the presence of a dilated duodenum and the symptoms of gastroesophageal reflux. This obstruction was related to the large size of the polyp and, probably, also to duodenal intussusception. Our patient was having recurrent episodes of duodenal intussusception which were present at the time of the initial endoscopy as well as during the CT scan, as evidenced by the invagination of the duodenal wall (Figure 3). However, it was in the early stage and had already been reduced at the time of surgery.

Brunner’s gland adenoma is the rarest of three types of Brunner’s gland hyperplasia or hamartoma [19]. The other two types are circumscribed nodular hyperplasia and diffuse nodular hyperplasia. Brunner’s gland adenoma is a benign lesion with a favorable long term outcome. Malignant changes are very rare with only 7 cases reported in the literature [2]. Brunner’s gland adenomas are usually small in size. Although large adenomas are uncommon, they are clinically more important as they are more likely to be symptomatic. Specifically, the giant variety is diagnostically challenging due to their large size. Most importantly, these lesions may mimic pancreaticoduodenal malignancy on imaging, or even intraoperatively, leading to difficulty in management [4, 20, 21, 22, 23] (Table 1).

In all the cases reported, pancreatic malignancy with duodenal infiltration or vice versa was suspected preoperatively. In four cases, even endoscopic biopsy and intraoperative frozen section analysis of the suspected neoplastic tissue failed to identify the true nature of the lesion. In three cases, a correct diagnosis of Brunner’s gland hyperplasia could be established only after a pancreaticoduodenectomy while, in the remaining two cases, transduodenal excision of the duodenal mass was performed instead of the pancreaticoduodenectomy which was originally planned. In two instances [4, 22], the pancreaticoduodenal mass was found to be diffuse nodular variant of Brunner’s gland hyperplasia on histopathology. This variety may be more difficult to differentiate from pancreaticoduodenal malignancy than the adenomatous hyperplastic type which usually presents as a well-defined polyp.

Mumtaz et al. [21] reported a case in which acute pancreatitis was initially suspected due to high serum lipase levels. Upper gastrointestinal endoscopy combined with EUS, performed because of the features of gastric outlet obstruction, showed a pancreatic head mass. Although intraoperative assessment suggested a pancreatic mass, a 6.6x4.5 cm fungating, circumferential mass was found in the area of main duodenal papilla with a normal pancreas on examination of the resected specimen. This mass was found to be a Brunner’s gland hamartoma on histopathology.

Skellenger et al. [24] also had a similar diagnostic dilemma with three patients and suggested an intraoperative biopsy to confirm the diagnosis. All these case studies suggest that Brunner’s gland hamartoma can be very difficult to identify and differentiate from a malignant neoplasm of the pancreas and the duodenum on preoperative or even intraoperative assessment, and may lead to “overtreatment”.

Preoperative endoscopy and biopsy may help in making a correct diagnosis but with limitations (72-89% sensitivity) [4] as these lesions are submucosal and may be missed by a mucosal pinch biopsy. Endoscopic ultrasound may also be helpful. On EUS, Brunner’s gland hamartoma is characterized by a heterogeneous solid and/or cystic or multicystic mass [25], or a homogenous echogenic mass located in the submucosa [26]. On barium examination of the upper digestive tract, these lesions produce a characteristic “cobblestone” appearance or a well defined filling defect [26]. Although intraoperative biopsy has a sensitivity of 83-92% [4], serious complications (e.g. pancreatitis, pancreatic fistula or bleeding) may occur in addition to the possibility of sampling error. However, major surgery, such as a pancreaticoduodenectomy, may be resorted to if there remains a strong suspicion of malignancy, even after an extensive work-up, provided such surgery is performed at a specialized center with low morbidity and mortality rates [4]. In our case, we were able to correctly rule out the pancreaticoduodenal malignancy by performing more extensive evaluation with a barium study, repeat endoscopy and endoscopic sonography.

Management of these lesions includes a conservative approach in asymptomatic patients. Only symptomatic cases require treatment. Conservative treatment, in the form of controlling of gastric acidity, rarely leads to regression of these lesions [4]. Therefore, endoscopic [27, 28] or surgical removal is the treatment of choice. Endoscopic removal is feasible in most of the cases as Brunner’s gland adenomas are usually small. However, large adenomas have also been successfully removed endoscopically [29]. Larger lesions, especially diffuse nodular hyperplasia, need surgical excision; options include laparoscopic [30] or open polypectomy, segmental resection, pancreas sparing duodenectomy [31] and, occasionally, pancreaticoduodenectomy with an excellent long term outcome.

To conclude, Brunner’s gland adenoma of the duodenum may present as pancreaticoduodenal malignancy especially when it is large. It may even cause jaundice due to ampullary obstruction and duodenal obstruction as may occur in pancreatic malignancy. Preoperative differentiation on CT scan may be difficult, and diligent evaluation with combined endoscopy and endoscopic sonography aided by barium examination may be helpful in reaching a correct diagnosis. If required, these investigations should be repeated to exclude the malignant process, the treatment and outcome of which is totally different from benign disease, such as Brunner’s gland adenoma.

2. Hol JW, Stuifbergen WN, Teepen JL, van Laarhoven CJ. Giant Brunner's hamartomas of the duodenum and obstructive jaundice. An overview of the literature and suspicion of malignancy in a case. Dig Surg 2007; 24:452-5. [PMID 18025786]