Pancreatic Pseudocyst of Gastrohepatic Ligament: A Case Report and Review of Management

A 30-year-old male presented in surgical outpatient department with a painful swelling in the epigastrium for the last 3 months. Four month back, he had severe epigastric pain radiating to back. He was treated for that in another hospital with intravenous fluid, analgesics and antibiotics. Fifteen days after this episode he developed heaviness in epigastrium and after a month or so noticed this painful swelling. Patient is alcoholic by nature. Blood investigations were within normal limits except high serum amylase (851 IU/L; reference range: 0-90 IU/L). Ultrasound and computed tomography revealed a cystic lesion in epigastrium of 47.1x27.4 mm size between stomach and left lobe of liver (Figure 1). A clinical diagnosis of cystic was made. On exploratory laparotomy, a cyst was present in the hepatogastric ligament (Figure 2). Cyst was removed in toto (Figure 3) and sent for histopathology. Report revealed the diagnosis of pancreatic pseudocyst. 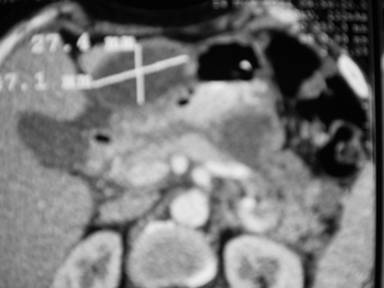 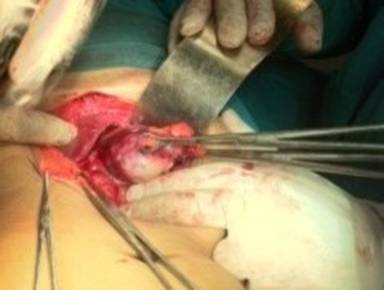 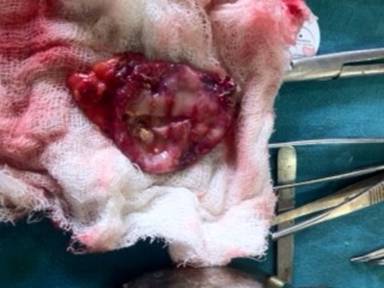 In acute pancreatitis, there is collection of inflammatory exudate which is surrounded by fibrous or granulation tissue and this is called as pancreatic pseudocyst. However, in chronic pancreatitis there may be duct rupture and pseudocyst is formed due to increased intraductal pressure. Pancreatic pseudocysts are typically formed and confined to the lesser omental sac [2]. About 20% of pseudocysts are extrapancreatic [1]. Pancreatic pseudocyst can ascend to liver via hepatogastric or hepatoduodenal ligament. While ascending via these ligaments, cyst can remain static in ligament also and can present as epigastric swelling with or without pain. It can also travel to spleen, stomach wall and mediastinum [1]. The gastrohepatic and hepatoduodenal ligaments are contiguous peritoneal ligaments that form the lesser omentum and are remnants of the dorsal portion of the ventral mesentery. The gastrohepatic ligament attaches the lesser curve of the stomach to the liver and contains the coronary vein and left gastric artery. The hepatoduodenal ligament attaches the duodenum to the liver and contains the portal vein, hepatic artery, common hepatic ducts, and part of the cystic duct. Until the 8th embryonic week, this part of the ventral mesentery also contains the ventral anlage of the pancreas. Hence, the hepatoduodenal ligament/hepatogastric ligament is a route of spread of pancreatic disease to the porta hepatis and liver [3].

Several mechanisms have been proposed for the intrahepatic pancreatic pseudocyst extension. One proposed theory is the leakage of the pancreatic juice into the pre-renal space from rupture of the main pancreatic duct or the side branches. Erosion through the posterior layer of parietal peritoneum can lead to fluid accumulation in the lesser sac and then follow the path along the gastrohepatic ligament leading to pseudocyst formation in these ligaments (as in our patient). Cyst can ascend to the left lobe of the liver also [4]. Similarly, if pancreatitis predominantly involves the pancreatic head and the enzymes exude and follow along the hepatoduodenal ligament to the porta hepatis then the pseudocyst can form in the right or left lobe of the liver [5]. Mediastinal pseudocyst is an uncommon entity and is a very rare complication of pancreatitis. When the pancreatic duct ruptures posteriorly into retroperitoneum, the fluid tracks into mediastinum and rarely mediastinal pseudocyst develop [6]. The pancreatic fluid may enters the mediastinum through the esophageal or aortic hiatus or foramen of Morgagni or the inferior vena cava hiatus and rarely by direct penetration of the diaphragm [2].

Pancreatic pseudocyst of gastrohepatic ligament must be differentiated from tuberculous abscess, teratomas and necrotic tumors in the gastrohepatic/hepatoduodenal ligament. Pseudocyst is a unilocular, round mass with a uniform wall, and diagnosis can be confirmed with clinical, laboratory and radiological evidence of pancreatitis. If there are gas bubbles then this suggests an abscess. CT demonstrates small calcification and fat in the teratomas located in the hepatoduodenal ligament area, and its border is round and sharp. Congenital cysts (duplication, mesenteric, omental, or choledochal) may also be localized to the hepatoduodenal ligament area [7].

Clinically, patients with intrahepatic pancreatic pseudocyst can present with continuous epigastric pain or recurrence of pain after initial resolution of acute pancreatitis [8]. On physical examination there may be a palpable abdominal mass [9] or less frequently hepatomegaly if liver is involved [10]. Blood tests are normal except high level of pancreatic enzymes [8]. An amylase level ten times greater than normal has 73% sensitivity and 98% specificity for diagnosing pancreatic pseudocyst [11]. Rarely, pseudocysts can be a sign of underlying malignancy. Therefore, it is essential to exclude underlying pancreatic neoplasm either by EUS with fine needle aspiration or by pancreatic protocol CT scan. Intra-abdominal pseudocysts can be diagnosed very accurately and rapidly with ultrasonography. However, it cannot determine the presence of mediastinal extension. Computerized tomography (CT) or magnetic resonance imaging (MRI) can confirm the location and extent of mediastinal pseudocysts. Computerized tomography shows wall of cyst as well as about the nature of fluid whether hemorrhagic or infective [12] where as MR imaging demonstrates atypical communication of pancreatic pseudocyst with other structures [13]. Diagnosis of a pseudocyst can be confirmed with newer techniques such as endoscopic ultrasound (EUS) and EUS-guided aspiration of fluid from a cyst with an elevated amylase level [14].

Pseudocysts having wall thickness greater than 1 cm, which is more than 6-week-old, having pancreatic duct abnormalities, are multiple, located in tail of pancreas and increasing in size on follow-up examination, usually does not resolve spontaneously and always require intervention [15, 16].

Simple aspiration of pseudocyst is associated with recurrence rate of 70%, but percutaneous catheter is related with success in 90% of cases [18] but catheter can erode bowel if catheter is kept for more than four to six weeks [17]. However, percutaneous drainage in type 1 pseudocysts (intact pancreatic duct) can be as effective as surgery. Furthermore, it can be a safer approach in critically ill patient and in high surgical risk group [18]. No doubt, surgery is treatment of choice if there is complete rupture of pancreatic duct; however, Shilyansky et al. [20], Ohno and Ohgami [21], Burnweit et al. [22], Jaffe et al. [23], and Lucaya et al. [24], have reported that surgery should be done only where percutaneous drainage is not successful. Point of entry of catheter varies. It can be placed through gastro-hepatic ligament, or between the stomach and spleen, or through trans-gastric approach. Disadvantage of trans-gastric approach is that catheter can get dislodged due to respiratory movement and peristaltic movement of stomach. But if cyst is of large size trans-gastric approach is more appropriate [22]. Catheter drainage along with octreotide (somatostatin analogue) can be another recommended method of treatment as octreotide decreases the basal and stimulated pancreatic secretion [25]. Catheter drainage is contraindicated if cyst is having very thick contents or with non-drainable necrotic material or if there is suspicion of malignancy or there is lack of safe entrée or cyst is with active hemorrhage or there is presence of arterial pseudoaneurysms [16]. As there is no universal recommended scientific data, percutaneous drainage should probably be considered as a promising alternative technique and not a standard procedure for such cases [26]. Complications, like infection (8%), pneumothorax (1%), pleural effusion (1%) and hemorrhage (3%) can occur due to percutaneous drainage [8].

Another option is endoscopy. Endoscopically a diathermic puncture is made between cyst and duodenum (cystoduodenostomy) or between cyst and stomach (cystogastrostomy). Mucosa of cyst bulges into the lumen of the viscera. Nasocystic catheter drainage is inserted for better drainage. But serious arterial bleeding and pseudocyst infection can occur due to this procedure. Endoscopic drainage is not successful if there is pancreatic duct disruption and it is not possible at all if the cyst is located more than 1 cm away from the viscera (stomach or duodenum) [27, 28]. Stenting of duct is done in the presence of duct disruption. Common complications of stenting are exacerbation of pancreatitis, stent occlusion or chronic pancreatitis [29]. Endoscopic drainage of a post traumatic pancreatic pseudocyst is successful in children [30].

Surgical drainage is the main stay of treatment, either external (for cysts with immature wall) or internal (in the presence of mature wall). Surgery can be also performed laparoscopically. Laparoscopic is being used as first-line treatment of pancreatic pseudocysts in children [32]. Laparoscopic surgery has been recommended as a safe, reliable, and minimally invasive treatment for managing pancreatic pseudocyst. Laparoscopic gastropseudocystostomy and jejunopseudocystostomy achieve adequate internal drainage, facilitate concomitant debridement of necrotic tissue within acute pseudocysts, and achieve good results with minimal morbidity. Surgical operations usually consist of gastropseudocystostomy, a duodenopseudocystostomy or enucleation if possible. These operative procedures carry a 10-30% morbidity rate, a 1-5% mortality rate, and a 10-20% rate of recurrence [16].

As there are no randomized studies for the management protocols for pancreatic pseudocyst, still certain advice may be given:

1) always differentiate between acute and chronic pseudocysts for better management;

3) if intervention is needed, always consider a well known procedure; the results of percutaneous or endoscopic drainage are probably more dependent on the experience of the treating doctor than the choice of process;

4) If surgery is needed, wait until an intern anastomosis can hold sutures (if possible 6 weeks).