Colloid Carcinoma of the Pancreas: A Distinct Pancreatic Neoplasm with Good Prognosis. Report of a Case

Context Colloid carcinoma is considered a distinct type of pancreatic neoplasia with specific histopathological and molecular features, and a better prognosis. Case report We present the case of a patient with a 15 cm locally invasive colloid carcinoma of the pancreas, in which an aggressive surgical approach achieved no evidence of disease 24 months after surgery. Conclusions If an accurate diagnostic approach and surgical resection are performed, the 5-year survival rate can reach 60%. Presence of invasive intraductal papillary mucinous neoplasm has been reported, and this can affect the prognosis. Adjuvant therapy has not demonstrated improvement of survival in surgically-resected patients.

Colloid carcinoma of the pancreas, also known as solid mucinous or gelatinous carcinoma, is a tumor that originates from the pancreatic ducts, and has been recently recognized as a distinct entity. It only represents about 1-3% of all pancreatic carcinomas [1]. Its main morphological characteristic is the presence of well circumscribed pools of mucinous material, containing detached epithelial cells floating in the mucin [2].

Pancreatic colloid carcinoma is considered a distinct subtype of intraductal papillary mucinous neoplasm (IPMN) [3]; this fact is important because it may dictate the surgical treatment. A differential diagnosis between colloid carcinoma and ductal adenocarcinoma is essential, because the biological and molecular differences between these types of tumor induce a more indolent clinical course, a better result after surgical treatment and a longer survival rate of the former.

This case report describes the clinical characteristics of a patient with a locally-invasive pancreatic colloid carcinoma, the surgical management and the outcome.

A 64-year-old man, with past medical history of high blood pressure and type 2 diabetes was evaluated in our outpatient clinic due to anemia. He also complained about mild dyspepsia and low-back pain over the last 18 months. Conventional blood tests showed microcytic anemia. Tumor markers were normal, except for CA 19-9 203 U/mL (reference range: 0-39 U/mL). A contrast-enhanced computed tomography (CT) scan of the abdomen showed a 12x7 cm inhomogeneous, low-density mass originating from the body and tail of the pancreas. The mass invaded the posterior gastric wall, the splenic flexure of the colon and the spleen. The superior mesenteric artery and the celiac axis were not involved; however, the splenic artery was amputated at its origin (Figure 1a). The Wirsung duct at the pancreatic head was enlarged (Figure 1b), with splenic vein thrombosis, segmental portal hypertension and esophageal varices. 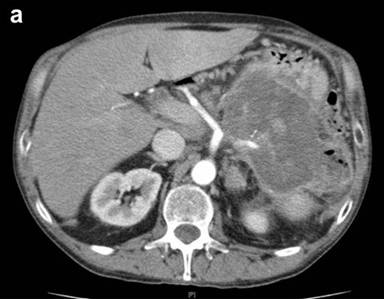 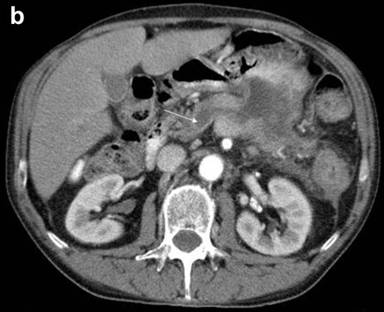 Fine-needle aspiration biopsy revealed a mucinous neoplasm with cellular atypia suggesting malignancy. ERCP could not be performed due to a duodenal diverticulum. At laparotomy, a large retroperitoneal mass invading surrounding structures was observed. A distal pancreatectomy with splenectomy, total gastrectomy, resection of a segment of transverse colon and a patch of diaphragm was undertaken. Intraoperative biopsies of the pancreatic transection margin showed high grade dysplasia of the Wirsung duct, so a completion pancreatectomy was performed. The reconstruction was made by a Roux-Y esophagojejunostomy and hepaticojejunostomy plus a T-T colocolic anastomosis and primary closure of the left diaphragm. The postoperative course was uneventful, and the patient was discharged on the 12th post-operative day.

The pathological examination of the specimen demonstrated a colloid carcinoma of the pancreas, 15 cm in diameter, locally invading the posterior gastric wall and the transverse colon. Retroperitoneal resection margins were free of invasion. The microscopic examination found pools of mucin with rows of epithelial mucinous cells showing nuclear atypia, and occasionally adopting a glandular pattern (Figure 2). Associated IPMN with high grade dysplasia (‘in situ’ carcinoma) invading the entire Wirsung duct was also observed. There was no metastatic invasion in any of the lymph nodes retrieved. After evaluation by the multidisciplinary team, no adjuvant chemotherapy was indicated. 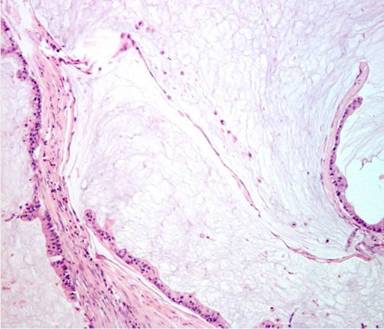 At two-year follow-up, a CT scan demonstrated no tumor recurrence, and tumor markers including CA 19-9 were normal. The patient remains asymptomatic and has an excellent quality of life 24 months after the procedure.

Colloid carcinoma of the pancreas is a rare mucous-producing tumor that must be considered a differential type of invasive tumor among pancreatic neoplasms [2]. It is a well characterized neoplasm in other organs, such as breast, prostate or colon, with variable behavior and prognosis depending on the established criteria for diagnosis in each organ [4]. In the pancreas, colloid carcinomas usually show an indolent clinical behavior, with a slow growing pattern and better prognosis when compared to ductal adenocarcinomas, yielding a 5-year survival rate close to 60% in resectable cases [1, 3, 5]. Preoperative diagnosis is of great significance in guiding patient management: thanks to the advances in imaging techniques, pancreatic tumors can be detected in early stages and defined better in order to plan an accurate surgical approach [6].

The different clinical behavior disclosed by the pancreatic colloid carcinoma may be in part related to two characteristic features of this tumor: a) altered tumor-cell polarity found in microscopic examination where stromal cell surface demonstrates secretory properties instead of ductal cell surface; and b) the type of mucin secreted by the tumor cells.

Production of MUC2 is highly specific in colloid carcinoma whereas MUC1 is secreted in adenocarcinoma [7]. Both MUC1 and MUC2 seem to have important roles in pancreatic neoplasia. MUC1 appears to be a marker of an aggressive phenotype and may facilitate vascular spread of tumoral cells. On the other hand, MUC2 is commonly expressed in tumors with an indolent course, such as some IPMNs and specifically in colloid carcinomas involving different organs [3, 8]. It has been postulated that secretion of MUC2 into the stroma provokes the formation of a gelatinous layer of mucin around the tumoral cells that would limit their metastatic spread.

Surgical resection, when feasible, is the treatment of choice in these tumors [6]. Since pancreatic colloid carcinoma exhibits a slow growing pattern with local invasion rather than disseminated disease, a radical surgical approach, tailored to the pattern of local invasion, may be warranted in order to perform an R0 resection. Moreover, there are no data available about the role of neo-adjuvant therapy for locally advanced pancreatic colloid carcinoma to decrease the tumor burden [1, 3, 6]. However, as mentioned above, R0 resection has been associated with an acceptable 5-year survival.

The specific diagnosis of the colloid subtype of IPMN may dictate the extension of the pancreatectomy, since leaving IPMN in the remnant pancreas may place the patient at risk of recurrence [6, 9]. A total pancreatectomy was performed in our patient due to the presence of scattered nodules found in the remnant Wirsung duct that was histologically consistent with IPMN with a high grade dysplasia. The role of adjuvant therapy in patients with pancreatic colloid carcinoma has not been specifically addressed. When an R0 resection is achieved, there is no clinical evidence that adjuvant therapy will improve neither survival nor disease-free survival rates [10, 11].

In summary, colloid carcinoma of the pancreas is a rare subtype of IPMN that presents an indolent clinical course and a local invasion pattern. A radical surgical approach may be preferred in order to achieve an R0 resection that can yield a 5-year survival close to 60%. The diagnosis of invasive IPMN may dictate the extension of the pancreatectomy. The role of adjuvant therapy has not been elucidated.