Context Endosonography-guided biliary drainage has been used over the last few years as a salvage procedure when endoscopic retrograde cholangiopancreatography fails. Malignant gastric outlet obstruction may also be present in these patients. We report the results of both procedures during the same session in patients with duodenal and biliary obstruction due to malignant disease. Methods A retrospective review from a prospective collected database. Results Technical success was achieved in all five patients; however, only three patients experienced relief of jaundice and gastric outlet obstruction. Conclusions Endosonography-guided biliary drainage and duodenal stenting in the same session is feasible. However, severe complications may limit the procedure. This is a challenging procedure and should be done by experts with special attention to patient’s selection.

Endoscopic retrograde cholangiopancreatography (ERCP) with biliary stent placement has become the preferred therapy for biliary drainage in patients with unresectable malignant biliary obstruction or those unfit for surgery [1, 2]. When ERCP fails, patients usually undergo percutaneous transhepatic cholangiography (PTC), which carries higher morbidity rates compared to ERCP. On the other hand, it is usually contraindicated in patients with ascites [3]. Endosonography-guided biliary drainage has been used over the last few years as a salvage procedure [4, 5]. It has a high technical success rate, but also a high complication rate. It is an evolving technique for which the best approach has yet to be determined. There are two possible access routes: transduodenal or extrahepatic [6, 7, 8] and transgastric or intrahepatic [9, 10].

Malignant gastric outlet obstruction may also be present in patients with pancreatic, gastric, duodenal, or metastatic tumors. Surgical bypass or duodenal stenting are the possible palliative options in such cases [11]. A recent multicenter trial comparing both treatments demonstrated the superiority of surgical bypass over duodenal stenting when survival was greater than 2 months [12].

We report the results of transduodenal echo-guided biliary drainage and duodenal stenting performed during the same session in patients with duodenal and biliary obstruction due to malignant disease.

From September 2010 to April 2011, five patients were referred for palliation of duodenal and biliary obstruction due to malignant disease. Demographic, clinical, laboratory, and radiologic data are shown in Tables 1 and 2. 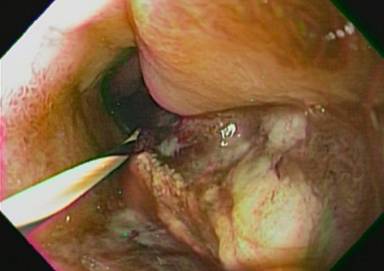 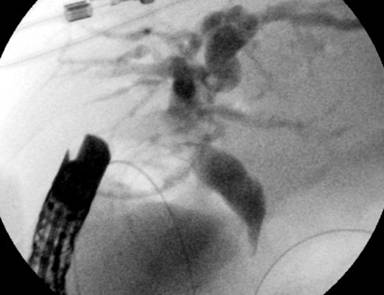 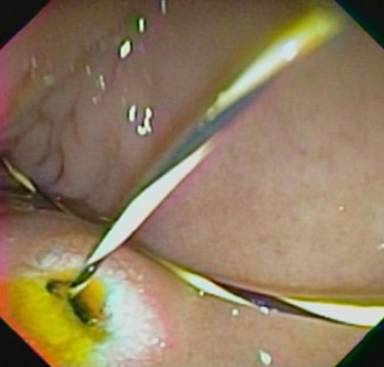 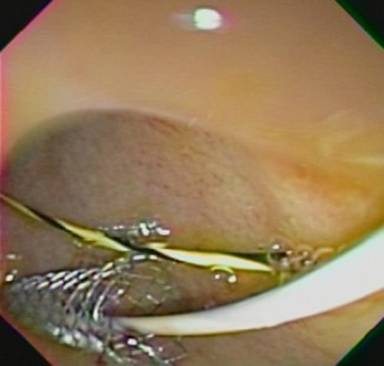 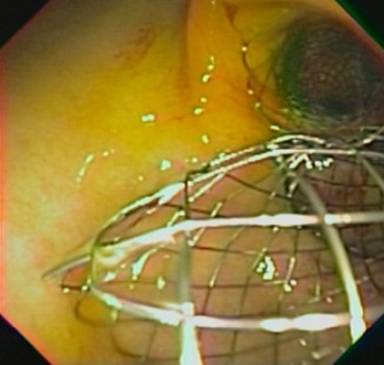 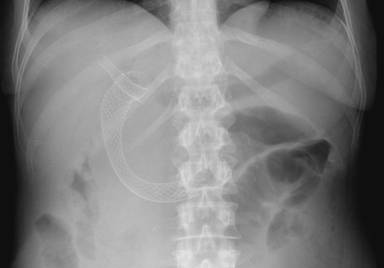 These patients were not part of research protocol. Their cases were discussed in a multidisciplinary round and because of their clinical conditions, the endoscopic approach was chosen. They signed the informed consent after complete explanation of the procedure and its possible complications.

Deployment of both biliary and duodenal stents was technically successful in all cases. However, only three patients experienced relief of jaundice and gastric outlet obstruction. Of those patients, only two were discharged from the hospital. Three patients died from direct or indirect endosonography-guided biliary drainage related complications (Table 3). 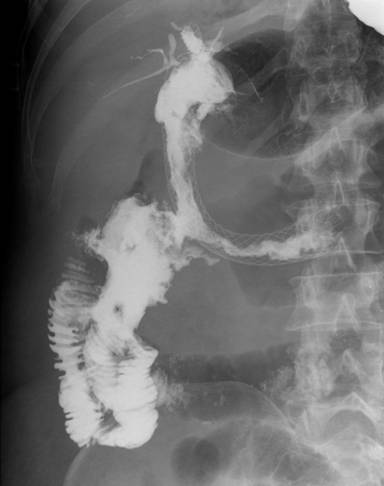 ERCP with placement of self-expandable metal stents is the gold standard for palliation of malignant biliary obstruction [1, 2]. However, when the tumor involves the duodenum, duodenal balloon dilatation is usually attempted to allow endoscope passage and, eventually, major ampulla cannulation [14]. If this is not the case, PTC usually is the next step. However, PTC carries a higher complication rate and involves the use of external biliary drains [3]. Moreover, PTC does not relieve duodenal obstruction.

We report a case series of 5 patients who presented with metastatic cancer causing both biliary and duodenal obstruction. Duodenal balloon dilation and direct access to the major ampulla proved unsuccessful in all patients. Despite the technical success of endosonography-guided biliary drainage and duodenal stenting in all patients, just three patients (60%) experienced relief from biliary and duodenal obstruction. One patient developed pneumonia related sepsis and died 15 days after the endoscopic procedure. The remaining two patients did not experience significant improvement of the biliary obstruction. In one patient, an immediate biliary leakage occurred, most likely caused by the inadequate choice of an uncovered biliary stent. It is possible that the presence of ascites in the subhepatic space prevented adequate adherence between the duodenal and common bile duct walls, predisposing the patient to this complication. The remaining patient developed cardiogenic shock in the immediate post procedural period probably due to myocardial infarction. The fall in serum bilirubin levels was very discrete and the patient died of irreversible shock 4 days later.

Severe complications are the main limitations of endosonography-guided biliary drainage and include bile leakage, pneumoperitoneum, hemorrhage, and cholangitis. The reported complication rates vary from 10 to 36% [4]. Our impression was that these rates probably reflected the learning curve of one of the most complex therapeutic endoscopic procedures, where expertise in both ERCP and endosonography is necessary. It is also recognized that the lack of dedicated wires, catheters, needles, and stents might contribute to the complexity of the procedure. However, based on the present series, biliary and duodenal adequate positioning and deployment of metallic stents in a single session did not prove to be overly challenging. Actually, it proved possible in all patients. In the present series, all procedures were performed by a senior endoscopist experienced both in ERCP and curved-array endosonography for 15 years. Except for the case where the choice for an inadequate model of stent (uncovered biliary stent) lead to a complication (biliary leakage), the unfavorable clinical evolution possibly reflected the importance of patient selection on results. In the present series, all patients presented with stage IV disease with ascites. It is also noteworthy that three patients were in their 8th or 9th decades of life and were clinically compromised as suggested by their low Karnofsky index scores.

A recent study favored surgical treatment of gastric outlet obstruction compared to metallic stenting, especially for patients with life expectancies longer than 3 months [12]. This was a concern in our series as clinical assessment and oncologic staging suggested shorter life expectancies. In fact, the indication for endosonography-guided biliary drainage was a decision of a multidisciplinary team, which included radiologists who found PTC to be unsafe due to the presence of ascites in all the patients of the present series.

Obviously, this small clinical series does not allow any conclusions to be drawn. However, it suggests that elder patients with stage IV cancer, ascites, and low clinical performance status scores are at higher risk for clinical failure of single session endosonography-guided biliary drainage and duodenal stenting, despite the technical success of the procedures. As clinical experience with endosonography-guided biliary drainage increases, further studies utilizing this challenging technique should address technical aspects, new devices, and patient selection.