Accessibility is a key factor in the ordinary life of cities and regions, but it becomes even more so in cases of emergencies and disasters. In the latter it is essential to keep transportation networks in service so as to provide assistance to those in need and to carry equipments and materials for search and rescue activities. Natural hazards may be an important threat for roads and railways, but they are barely considered in the design of future infrastructures. Instead, it is critical to be able to forecast how a given corridor may interact with existing hazards on the one hand and on the other to anticipate what would be the major obstacles in already existing networks. In this article a method to assess the vulnerability of lifelines to seismic risk will be illustrated. The latter was developed in the frame of a project funded by the Lombardia regional government in the years 1999-2001. This research linked the analysis of lifelines to other urban and regional systems, addressing the many induced and indirect damages which are the inevitable consequence of public utilities interruption. The project provided two outputs: a vulnerability assessment of lifelines crossing the most seismic areas in the region and an event scenario. In both cases the work has been split in two steps: first suitable models have been developed, and then applied to the study area. The need for creating new models derives from the recognition that it is rather difficult to find systemic approaches in the current literature. The goal for this research, instead, was to start from the inter and intra dependency links connecting lifelines one to the other and to the many urban and regional systems which depend on them for their function. Therefore, it was decided to enlarge the scope of the project both spatially and systemically. With respect to the first issue, a larger area than that covered by the seismic municipalities of the region has been considered, so as to detect the spatial influence of localized damage. Regarding systemic factors, the degree of dependence on lifelines of other urban systems has been assessed for emergency situations and for the reconstruction phase. In the first case, hospitals, civil protection centres, fire departments were analysed so as to understand to which point and for how long they could still provide service without essential lifelines or being disconnected from major transportation routes. Referring to the reconstruction, not only the cost of repairs has been evaluated, but also the economic and social costs borne by economic sectors and by the population as a consequence of lifelines interruption or malfunctioning. Coherently, the final event scenario resembles much more to a chain connecting physical damages to the induced and secondary damages occurring in systems dependent on lifelines than to a sum of individual losses. First results obtained in the Brescia province show promising paths for future research, while pointing out the many obstacles that still exist to implement real interdisciplinary approaches.

Scira Menoni, Politecnico di Milano
Associate professor at the Politecnico of Milan, teaching Urban planning, environmental analysis and assessment and Planning techniques in risky areas. Field of specialization technological and natural risks prevention, looking particularly at non-structural measures and giving a specific stress to land use planning and urban development control. She also teaches at the Geneva University, lecturing in the postgraduate program Analysis and Management of Geological Risks. 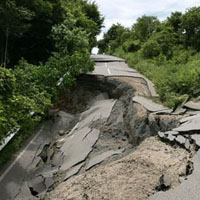