Impact of the High Speed Train on the European Cities Hierarchy

The European space is marked by the recent beginning of the dualism nation-region. In it the cities take on a fundamental role because their success becomes the success of the territories around. Manuel Castell has maintained that the city is the social structure in which any territorial phenomena (from the economical development processes to the relations between classes or ethnic groups, from the public intervention to the financial accumulation) takes on its bigger strength because in it are concentrated the focusing in the territorial transformations. Obvious the cities are not the same, for physical or functional dimension; besides every innovation adds and modifies the relational system previously created. Aim of the paper is to analyse the factors generating the urban hierarchies to the European level and the impact on it of the new high velocity nets. In the first section it is carried out a reading/analysis of the hierarchies in the urban European system, as outlined in a series of studies. The second section analyses the role of the communication infrastructures in the building of the hierarchies and, in the third, is deepen the impact of the building of European high speed network on the fluctuations in the cities hierarchy. The paper asserts that the hierarchy is influenced by the growing of this infrastructure only for the second level positions, while the head positions are not influenced by it. 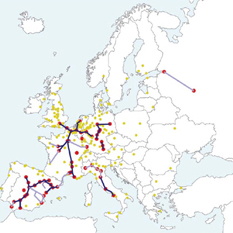