The relationship between mobility and patterns of urban development has been in depth analyzed by many scholars since the Nineties. They clearly highlighted that the priority assigned during the last century to the private cars and the potential for a high freedom in all kind of trips guaranteed by cars represented the key factors for the fast spreading of low density residential settlements which, in turn, drove towards an increase in the mobility demand and, consequently to the building up of new road infrastructures. Such patterns of settlements, generally defined through the expression “urban sprawl”, often affect rural areas surrounding big cities, developing themselves along main transport axes and/or along coastlines. Generally, these types of settlements are scattered and irregular, including large agricultural “enclaves”. They are also characterized, apart from the low densities, by the strict separation among residential, commercial and productive areas and by the lack of meeting places. Urban sprawl has been developing in the United States since the beginning of the last century, triggered and largely fed by the mass spreading of private cars. Up to the Fifties, the compactness of historical cities in Europe counterbalanced the spreading of the low densities residential settlements in the United States. Nevertheless, starting from the Fifties, urban sprawl has been rapidly spreading in Europe and in Italy too. In detail, in Italy, territorial development was largely relied upon road networks and only recently, in comparison with other European countries, more efforts have been directed towards the implementation of effective rail networks in urban areas too, meant as a key tool to avoid pollution and congestion phenomena, generally consequent to the mass motorization. In the Nineties, mainly due to the spreading of the sustainability paradigm, the awareness of the un-sustainability of a mobility largely relied upon private cars and of the numerous and generally undesirable effects due to the relation between mobility choices and sprawling of the cities largely increases. Thus, according to the current relevance of the phenomena of sprawling, this paper will focus on urban sprawl in Europe. In detail, based on current scientific literature and on the main findings of European Research Projects, the relation between patterns of residential settlements and mobility choices and the main consequences, in terms of environmental and social costs due to urban sprawl will be analysed. Finally, main issues and guidelines arising from European research projects and mainly addressed to change current mobility and land use patterns, opposing to urban sprawl and to its consequences, will be highlighted.

Adriana Galderisi, DiPiST
Researcher at the “Dipartimento di Pianificazione e Scienza del Territorio” of the University of Naples Federico II, Professor of Town Planning at the Faculty of Engineering of the University Federico II; Ph.D. in Urban and Regional Planning. The research activities are addressed to the requalification of urban environment, focusing on the relationships between urban mobility and urban quality and on the vulnerability of urban systems to natural and na-tech events. 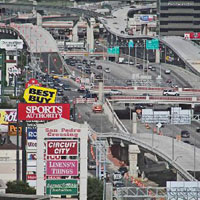 Cities need to modify and/or adapt their urban form, the distribution and location of services and learn how to handle the increasing complexity to face the most pressing challenges of this century. On these topics and the ones born during the last year, the scientific community is working in order to minimise negative effects on the environment, social and economic issues and people’s health.