The Former Railway Areas of Milan and Florence

The relationship between railways network development and urban sprawl has always been very close. A relationship of synergy and complementarity, which sometimes becomes a difficult cohabitation, between the “city “ and the “railroad” is established: the presence of the service and infrastructure networks can represent a weakness for achieving a balanced development, or even a factor of risk and of environmental pollution. In Italy, in the last decades, the modernization of infrastructures and the reorganization of the railway network led to the abandonment of many areas. This has made possible the setting up of programs aimed at achieving the conversion of the former railway areas to new land uses. Interventions regarding the railway areas may have a double origin: projects inspired by the opportunity to upgrade or to build up a new station that also involve the surrounding areas or programs that cover wide abandoned or being abandoned areas occupied by bundles of tracks, stores and warehouses, etc.. The disused railway areas have characteristics that would allow their reuse within a comprehensive plan based on the possibility of working at the same time on the transport system and on the land use planning. The redevelopment of these areas could be the testing ground of transformation projects involving also the radical re-design of public transport networks. The paper, starting from these assumptions, is focused on the programs developed for the disused railway areas in Milan and Florence. In Milan, many transformation projects start from the abandonment of the railway areas. Here earlier than in other Italian cities, programs aimed at working simultaneously on the reorganization of the transport system and on large real estate development initiatives have been implemented. In 2005, the Municipality of Milan and the Ferrovie dello Stato Group SpA (the Italian Infrastructure Manager) signed a Framework Agreement referred to stations and areas no longer useful for the railway service, located in different districts of the city and covering a total area of about 1.300.000 square meters. The stated objective of the agreements was to organize the urban development of the disused railway areas with the enhancing of the public transportation rail in Milan. Even in the case of the city of Florence, disused railway areas have long been the subject of agreements among local authorities and the Ferrovie dello Stato group. The incoming of the high-speed train in the urban area has been the opportunity to redefine the rail system mobility not only of the entire city but also of its metropolitan area. Within this comprehensive project, in the 2008 a Memorandum of Intent has been signed by the Municipality, the Region, the Province and the Ferrovie dello Stato group, referred to the railway areas, covering a total surface of about 267.000 square meters, mainly located in the center of the city.

Rosaria Battarra, CNR - Dipartimento di Pianificazione e Scienza del Territorio
Researcher of the National Research Council (Institute of Studies on the Mediterranean Systems in Naples). Since 1989 she has been cooperating with the “Dipartimento di Pianificazione e Scienza del Territorio” of the University of Naples Federico II, carring-out research into urban redevelopment and specially on the tools and procedures for the implementation of the plans. 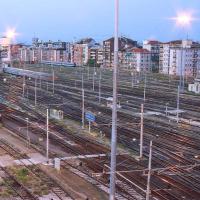