The project of the new station of Torino Porta Susa is the project of a huge urban public space, where the station, conceived as an urban gallery, becomes a real street, a “passage”, a new kind of urbanity shape for the future city. The railway station’s transparent volume - a 385 m (the length of the TGV) long steel and glass tunnel, 30 m. width, with a variable height compared to the outdoor street level (between 12 and 3 m at the height of the cover) - is proposed as a modern reinterpretation of the nineteenth century’s urban galleries and the great historical station’s halles, as well as a kind of symbolic building. Symbol of movement, of the travel universe and the presence of the transportation universe in the contemporary city, urban simulacrum of the object train disappeared from the urban scene below the future Central Spine. The sinuous movement of the tunnel follows the flows of urban pedestrians from the city towards the different transportation modes presents at various levels (national and international lines AV, regional lines, subways, taxis ...) emphasizing with its lowering the presence of the big void inside of the underground subway station, about 20 meters deep. The gallery, oriented north-south, folds with its internal pedestrian paths to bring natural light and the sky of Turin, to the quays of trains (at an altitude of -10 m) and the Subway (which share -20), transformed so’ in a sort of urban sidewalks. The fast rhythm of the structure of arches with step 360 cm. is marked by the presence of numerous openings along the longitudinal development of the gallery, which is crossed by three transversal passages inside the gallery and is bounded by two others on the north and south of the lot, connecting the city from east to west at street level in continuity with pre-existing axes. The presence of these transversal passages accentuates the urban value of the Spina which was to re-connect the two sides of the city until now shared by the ancient railways lines. In that way the city comes inside the station and the station becomes a real part of the city, permeable to pedestrian flows crossed in all directions and at different levels. The internal distribution of the different functional areas is based on a balance program with approximately 10.000 m² of services to travellers and the city (ticket offices, shops, restaurants, bars, terraces), approximately 10.000 m² of hall and public paths and still about 10.000 m² of technical areas, parking and service areas, ... The glass roof (surface of 15.000 m² ) will be equipped with a photovoltaic system (installed power = 765 kW peak) 2300 arranged on the panels that make up 3600 (surface approximately 9.000 m²) capable of producing 680,000 KWH’s year of electricity consumed in the public network and corresponding to approximately 35% of domestic needs of future PV, which we hope will become a new symbol for Turin.

Silvio d'Ascia, silvio d'ascia architecte
Silvio d’Ascia, born in Naples in 1969, has lived and worked in Paris since 1993. After a period in association with G.R. Associés, he founded his own office in 2001. His international design activity (France, Italy, China ...), thanks to his Italian humanist education, is deeply connected to an explicit reflection on new forms of urbanity of the third millennium city, and modern development poles' identification of contemporary society, often within historical contexts: multi-modal interchange nodes, mixed-use residential centers, cultural centers,... In Naples, in his hometown, his creative research, has been the opportunity to be experimented in some projects: Montesanto Station (2003-2008), with the proposal for the transformation of the “Complesso della S.ima Trinità delle Monache” (2005-07), Torregaveta Station (2005-10), the new University Centre of Agricultural Sciences and CNR at Herculaneum (2006-construction in progress), a new commercial hub Ge.Co. (2005-2010), a multifunctional complex called "la Porta del Parco" Bagnoli Futura, recently inaugurated. While developing his activity in Naples, S. d’Ascia, in association with AREP, has successfully participated to a number of prestigious international competitions in Europe and China: a new technological center for the stock exchange of Shanghai (2005-2010), the New Palazzo dei Congressi in Rome-Eur (2000, second position), and the winning project for the new station of Torino Porta Susa (that will be inaugurated at the end of 2011), with a tower of services (competition won in 2002)... Some projects have already been presented in numerous magazines and exhibitions in Italy and abroad (Venice Biennale) and a biography has just been published by CLEAN. 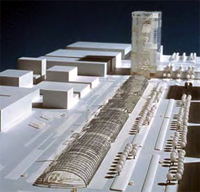