Archaeology and the City: the Waterfront Redevelopment

This paper describes the evolution of the coast landscape facing the oldest core of Naples re-built, through the archaeological excavations, during the works to realize the lines 1 and 6 of the metro. The archaeological intervention has been a unique knowledge opportunity, for its wide dimension and for the fact that it has developed in a single topographic compartment such as the city water front. It is remarkable because of the interlacement of different factors: for its technical and methodological complexity, for the importance of the scientific acquisitions, for the strict relationship with an engineering public work included into one of he most important transformations of the contemporary city, started by the Transportation Municipal Plan. First of all it should be stressed that the investigations, from the methodological- procedural point of view, give evidence of an early and preventive archaeological activity, started already in the mid ‘90s of the 20th century, in a period being very far from the present laws in force which control the archaeological impact of public works. In concomitance of the implementation of archaeological safeguard specific regulations in the variant of the City of Naples Master Plan, based on the arrangement among the Ministry of the Cultural Heritage and Environmental Conservation, the Municipality of Naples and the Metropolitan Company, concessionary for the works, the archaeological activities have been implemented, from the preliminary surveys to the extensive investigations on the stations within the public work program, of which they have become a preliminary and unavoidable operating phase. The project of the line 1, targeted to link the hill area, recently served by an effective rail way system, to the oldest core of Naples settlement, avoids the Neapolis urban area, entailing a route immediately outside it, placed in the Rettifilo district restored by the Società del Risanamento (Restoration Company) in the late nineteenth-century. The surface presence of stratum water had been a condition that had always barred the possibility, though traditional methodologies, of wide knowledge investigations and of eventual compartments of archaeological exploitation. If those environmental influences had blocked the explorations in the coastal strip of the historic downtown, now they have been implemented in the realization of the public work by the complex building technologies of the stations, starting from the delimitation bulkheads and the other technical devices. Consequently a huge operation of “urban archaeology” began, one of the most important on European level, which, through the systematic excavation of all the stations (Toledo in via Diaz, Municipio in piazza Municipio, Università in piazza G. Bovio, Duomo in piazza N. Amore, Garibaldi in piazza Garibaldi) and the relative ventilation rooms, although with operating difficulties and complex problems of safeguard and exploitation, has exponentially increased the knowledge of the evolution regarding the Neapolitan urban coast landscape. From the above-shown view, the present investigations fully correspond to the “knowledge safeguard” concept applied, according to the principles of urban archaeology – the branch of archaeology that investigates the general settlement dynamics of an historical city -, to all the stratifications of the water front subsurface. 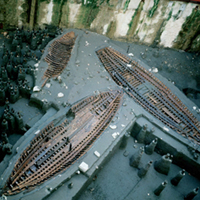