Infrastructures for Mobility and Urban Quality. Naples a best practice

Mainly in Italy but more considerably in many European countries, the policies targeted to build transport infrastructures did not succeed in meeting the growing demand for mobility or, at least, have been addressed, for many decades, to increase the infrastructure supply (roads) that showed their limits but mostly their inefficiency as regards costs and negative impacts. The lack of policies addressed to make valid alternatives to private transport and the speed with which the need for mobility has increased have led many cities almost to collapse. Problems of congestion, pollution, urban decay are the elements associated with this process, with heavy environmental as well as economic and social consequences. In order to make up for this consolidated situation, policies targeted to improve rail public transport are being implemented as alternative to private transport. The interventions are usually very complex and often unpopular, also for the need to make interventions in already consolidated contexts with consequent problems linked to the fragility of the territory, the difficulty in organizing the building site for the works, with a further traffic increase near the usually long-lasting building sites. The analysis of the most important experiences points out, however, that where the interventions for transport infrastructures have been associated with urban transformations targeted to build, around the stations or inside the stations themselves, functional poles or at least opportunities of urban requalification there have been numerous results and a mitigation of negative impacts. The case of the Line 6 Mostra-Mergellina route of the Naples subway is very interesting because, although no surface stations have been realized but only simple accesses to the infrastructure, its realization has produced an important process of requalification, affecting an important area of the Forigrotta district, one of the largest and most populated district of Naples. The interventions for the realization of the Line 6 have offered a rail public transport, in line with the European security and comfort standards, to the Furoigrotta district and to the whole city but, besides that, they have allowed other important surface interventions considered as the elements of an integrated program of actions that have produced important opportunities of urban requalification for the city. 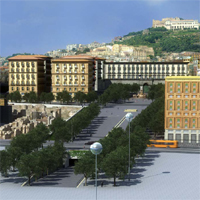