Design and Infrastructure: the Transformations of Senigallia’s Interface among Town, Port and Canal

Senigallia is one of the several average-sized coast towns that, in the last decade, paid attention to redesign and reorganize their interface spaces between urban contexts and seafront activities. It is an attempt to re-establish a continuity between the urban fabric, the functional areas along the coastline, and the infrastructural system. Today, Senigallia’s morphological scenery shows a mixed seafront border line, whose characters have been alternatively determined by defense and protection needs, and, more recently, by trading and commercial functions. The town is crossed by the Misa river, a major linear infrastructure, which imposes its unfathomable laws of floods and flows, while claims some instruments for water control; the town is also dramatically split by the railway line, whose disruptive and excluding presence affects Senigallia and a great part of the Adriatic coast. In such terms, urban design, as a field of experimentation, is a powerful technical instrument, together with an appropriate management and control of urban policies, to elaborate operative proposals for sewing up the fracture – apparently incurable –, caused by the functional alienation of river banks, the decay of wildly urbanized coasts, and a poor integration of infrastructures into the urban dynamics. Several design experimentations have already been made in such direction; this is a proof of an important change in design trends, which could be applied to Senigallia’s situation too, in the frame of a vast program of urban refurbishment, promoted by the Municipality. Two noticeable interventions of this kind are: the enlargement and technical/functional upgrading of the port, and the project of a new tourist and residential district, designed by Paolo Portoghesi, to be built in ‘Sacelit/ex Italcementi’ area, one of the many in-between areas, dismissed and left for a long time abandoned, as a memory of a bygone productive season. In all these enterprises, the topic of infrastructures plays a dominant role. The need to re-balance and re-establish a relationship with the town definitely requires a new planning of existing tracks, accesses, and relational spaces. 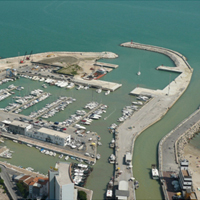