The municipality of Fiumicino, indipendent of Rome since 1992, plays two important roles in regional planning: it can be considered both an autonomous town and a satellite city of Rome. Because of its recent history, actually Fiumicino’s territory still presents the outskirts characteristics (many residential areas, lack of important public and private services, low quality of buildings and public spaces, inadequate infrastructures) and not the shape of an independent town, although some chief and characteristics elements like the fish market, which is one of the most important of the Mediterranean sea, and the archaeological area of the ancient port, build at the time of the Emperor Traiano (II p.C.). In fact, at that time, Fiumicino had a specific identity: it represented the gate of Rome from the sea thanks to this port, which was renovated several times because of problems concerning the seabed. Then, after many transformations and attempts of requalification, the port was definitively transformed into a fishing dock. Since 1960, Fiumicino has played this ancient role again, thanks to the construction of the Leonardo Da Vinci Airport; now it is considered the gateway of Rome from the air, while the same role from the sea belongs to Civitavecchia’s port. However it’s important to say that the airport and the town are adjacent but not integrated. In fact, today, because of Capital’s process of growth, which absorbs all near minor towns, and because of the airport, Fiumicino is considered only an appendix of Rome, without a specific identity, but in the last years, some infrastructural aspects have been reconsidered, like its geographical position on the cost and the short distance between the town and some important poles like Rome, Civitavecchia’s port and the industrial areas of Gaeta and Pomezia. So the port authority of Civitavecchia has decided to extend its administration to the areas of Gaeta, which just has a trade port, and Fiumicino, with the construction of a new one. The new port project, which is following the bureaucratic course, consists in the realization of an important logistic hub for trade and passengers; it is considered an important occasion for an increase in the economic development, because together with the realization of the port, the whole infrastructural system of the region and of the central Italy will be transformed. At the same way the port should be an important occasion also for the renewal of Fiumicino’s urban territory, if local administrators and the port authority decide to cooperate for a unique strategy of planning, with the common objective to mix the port with the town, and to promote the development of Fiumicino and of the infrastructures at the same time. In fact, the port, the airport and the other important elements of Fiumicino, could form a new complex system, a new town with a specific role in the territory and with a new distinguishing feature: the gateway of Rome. 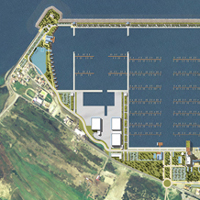