Highways of the Sea: it is not only a matter of water

The Motorways of the Sea (MoS) concept was first introduced within the EU executive’s White Paper on European Transport Policy back in 2001. So far, four Motorways of the Sea corridors have been considered to be fully working by 2010: the “Baltic Sea”, the “Sea of Western Europe”, the “Sea of South-East Europe” and the “Sea of South-West Europe”. In this project Italy occupies a central role both geographical and strategic. In fact, among the thirty priority projects for the realization of the TEN-T network, five projects involve Italian regions. For this reason too, the realization of Motorways of the Sea represents a focal point of the Italian government policy. As matter of fact, Italian seaport are characterized by a lack of availability of coastal areas. This is because of morphological aspects but much more it is due to the closely relation between port and city. In Italian case, in fact, the port structure is close to historic city and it is a very important part of the history of the city itself. The heavy demand of space due to the increasing specialization of port activities will strongly modify this relationship. The project “Motorways of the Sea” bases on the idea that maritime traffics could be a valid alternative to the road traffic both to reduce pollutions and negative effects. Its development needs more disposable and specialized areas to make maritime transport more competitive than road one. Competitiveness amongst ports is based on infrastructural comparison, then ports will need more and more spaces to be ready for action. The reorganization of the regions closed to ports will be strongly request. In the meantime the integration between port and city becomes an essential development condition. Critical issue are addressed to the “city-port region” to be integrated and competitive. To be efficient, these “regions”should have services and facilities tailored to the needs of new methods of integrated transport. In some cases the reorganization of the whole city-port system will be required. Such a reorganization needs a public and private coordination in order to reduce negative impacts on urban system. The success of the project of Motorways of the Sea also depends on ability to integrate port objectives of development and urban exigencies. This article proposes to investigate the possibility of achieving such integration. 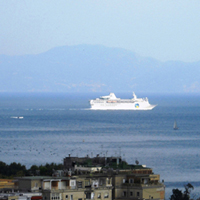