The great increase in the demand for private mobility with the con­sequent macroscopic growth of channels to meet it, together with short-sighted policies of transport and urban development spread above all in Italy, has produced pollution, congestion and unlivability in the last fifty years.

The hope of assuring the maximum individual freedom of travel to people living in consolidated urban centres, in addition to those living in the outskirts arisen and developed without any reasonable urban logic, still goes on producing congestion of vehicular traffic, conside­red, by the majority of citizens, the main cause of the deterioration of the quality of life in our cities.

Indeed, also the most recent reports on environment in Italian cities show that the pollution levels are increasing in the big cities, although the news are full of very expensive projects, innovative solutions and unexpected goals continuously shown by public administrations. One of the main environmental detractors is car traffic, which has recently gained on public transport. unlike the previous period. Most of mobility policies implemented in our cities aims at reaching the modal balance by means of measures for controlling and managing the demand for mobility, for mitigating traffic and limiting circulation., such as the road pricing and the parking strategies; for developing and increasing public transport and not polluting means of transport, car sharing and car pooling.

All of them have showed modest results both in terms of pollution reduction and vehicular traffic reduction. For over fifty years, mostly in the United States, the Personal Rapid Transit has been tested, a system of public transport trying to join two apparently incompatible factors: the possibility of assuring individual travels and the need for decreasing the levels of acoustic and air pol­lution as well as the congestion caused by private vehicular traffic. In Italy this system is still not well known despite the versatility of its fields of application. In the United States and all over the world the most successful applications concern circumscribed mono-functional urban ambits, such as large areas for offices, airports and so on, but the characteristics of this system - such as flexibility, capability of integration with other wide-range systems of public transport, little dimensions of the exchange junctions, quite low cost - can allow to realize it also in different typologies of area.If many people are doubtful about the effectiveness of this system, on the contrary, other people think that its steady implementation and experimentation is necessary to improve urban liveability.These last ones believe, in fact, that the combination of small vehicles similar to private car, the advantage of trips without intermediate stops and changes of car, cost reduction, possibility of a wider accessibility not reachable by traditional means of public transport are the key basic elements to replace car travels with low polluting means of public transport.

Associate professor of Urban Planning Techniques at the University of Naples Federico II. Member of the Researcher Doctorate in Hydraulic, Transport and Territorial Systems Engineering. Scientific consultant for Naples Municipality for the Strategic Plan, for Avellino Provincia for the Territorial Plan of provincial coordination Preliminary. Primary research interests are in vacant sites in the processes of urban requalification, in relationships between urban transformations and urban mobility, in estate exploitation produced by the urban transformations. Author of over 80 publications. 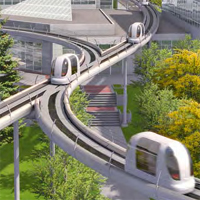