Ports, Transport and Marine Culture in the Cities of Italy, for the 150th Anniversary of the Unification

The celebrations for the 150th anniversary of the Unification of Italy also offer the opportunity to question the history and development of this country, particularly in reference to the maritime culture and the system of water transport. In a peninsular country like Italy, with its 7,500 km of waterfront, the presence of ports has always been crucial to economic growth and its success in international markets. But the second half of the twentieth century, cities and their ports have been gradually separated, resulting in situation of conflict and ongoing tensions. Only recently – following the Law 84, 1994 - new forms of ‘dialogue’ have allowed, on certain occasions, to restart political consultation on the development plans of the port areas and on improving the situation of urban areas close to ports. For all these reasons, the occasion of the 150th anniversary of the Unification of Italy can be a significant moment to resume the debate on the role of Italian ports in the history of our country, and possibly increase the potential that they may have, according to the positive and encouraging data of the entire maritime cluster in recent years, at least until the economic crisis of 2008. At the same time, the complex relationship port-city can be analyzed, with a view to mutual recognition of their needs and to the development of their activities in a framework of practical and effective, cooperative spirit, which requires both a greater mutual understanding as well as a more effective targeting to achieve a lasting and sustainable urban quality. The gradual economic globalization and market liberalization have led to a general increase in trade globally and in particular the Mediterranean has become a centre of traffic flows East-West and North-South. Italy, located in the middle of the Mediterranean basin, is now once again become the crossroads of the most important lines of goods and passengers connected world, experiencing a period of intense growth in maritime trade. Except for those ports with a strong presence of the cruise segment, which recorded growth rates of interest, the global economic crisis of 2008 has had very heavy in this sector (freight traffic to trucks and containers). This is also due to some historical gaps of the Mediterranean ports, such as the lack of rail connections to and from the ports, although Port Authorities are trying to bridge the gap both in terms of infrastructural interventions and environmental sustainability, through policies of sharing and coexistence between the port and the surrounding area and through a renewed and widespread ‘culture of the sea’. Since only through a cultural approach and mutual education will emerge a new perception of the port in the city and the city in the port. In fact, there are already encouraging signs of a recent appropriation of the port in a positive light and of a recovery of marine culture in several Italian port cities. Through a slow and complex process, articulated through different events, is gaining a new ‘feeling’ in relation to ports, seen in the key of a resource and as an integral part of a city, provided they respect certain rules necessary for sustainable urban living. 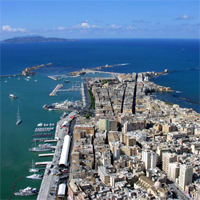