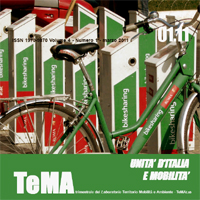 The Italian Unification in 1861 was the beginning of large modifications inside the country; it started, among the others, a process of unification of the national mobility network, for a long time fossilized inside the borders of the pre-unification different states. The unification process was based on the existing networks; the result was that the areas equipped with the most advanced networks were favored, kept their supremacy and got ahead in the competition with the less developed national areas. The development of the national network has been based, for a long time, on the improvement of the railway network. Only after the beginning of the mass motorization, after the Second World War, the motorway network has prevailed by absorbing, starting from the Sixties, most of the national investments. Consequently, the railway network slowly began declining and, only in the last decades, the decline has been limited by investments in high speed railway network. Meanwhile, the development of air and sea transport has produced a diversification of the mobility system, although it is, in any case, mainly based on road transport both for goods and people.

The aim of this issue of TeMA is to investigate the state of mobility systems in Italy according to a historical perspective. The Italian Unification was, indeed, a relevant opportunity for deeply influencing several sectors, among which the infrastructure one. In detail, the strong territorial divisions in the peninsula induced: a network development mostly inside the different states, the lack of modern axes connecting the different states and, finally, different technical and building characteristics both for road and railway network.
Published: 2011-04-26