The City Logistics within the Transformation Process of East Naples

The investigation field spreadly defined as “city logistics” is only a segment of a wider field of investigation concerning the whole chain of goods distribution and storage. That segment points out the so-called “last mile”, namely the last section of the complex chain related to the carrying of goods from production places up to their final destination: the retail network. Indeed, it is just the last mile of the chain the one that mostly affects the urban areas: in these last ones the demand for goods mostly converges and, consequently, the supply of retail goods. Moreover, while there are several innovations that have affected the wider field of logistics in the last decades, on the contrary there are few successful investigations and experimentations concerning the innovation in the modalities of final distribution of goods. As widely stressed by some European projects, goods transportation in urban areas represents an important factor of decay for several reasons: – except for few pilot experiences, it is still mainly carried out by road transport which represents one of the main causes of congestion and air and acoustic pollution in urban areas; – the access of heavy transport means in the core of urban areas strongly clashes with the current goal of most European cities that is to reduce car traffic in central areas; – the scarce availability of open spaces in the historical cities makes difficult to to find out adequate areas for loading and unloading operations; – the use of heavy means of transport for goods distribution produces economic disadvantages for the haulers too. Facing up to the importance of the problem, several and heterogeneous initiatives have been undertaken in many European cities to control and reduce goods traffic in urban areas: from the ones targeted to reduce the access and the transit of goods transport or the loading and unloading operations, to the more complex ones aimed at creating areas for goods distribution inside or near the urban areas, using eco-compatible vehicles for the distribution of goods inside urban areas, especially in the historical centers. It seems currently shared the idea that the problem of goods transport in urban areas has to be faced taking into account both the organization of urban activities and the mobility. This fact implies that, in defining the strategies for rationalizing/reducing goods transport, the characteristics of the urban context, the organization of the retail network, the more general choices regarding urban mobility, the environmental policies should be considered. Starting from those assumptions, this paper points out the solutions up to now suggested for the reorganization of goods distribution in the Neapolitan urban context, focusing in detail on the role that the eastern area of Naples could play in order to re-organize the distribution of goods in the historical city. 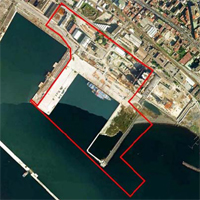