Railways and the Making of Italian Unification

The making of the Italian unification is strictly connected to the history of railways. Some lines were born few years after the invention of the train, starting with the Napoli-Portici line (1839). There were short and separated sections built independently by each State. Milano- Venezia was the first big railway built in the peninsula, within the Lombard-Veneto Reign belonging to the Austrian Empire.

The improvements of railways in Europe were an indicator of rapid advance of land ways of communication but, at the same time, they enhanced the backwardness of the Italian situation. However, the idea of unification of the peninsula, at least territorial, to be accomplished by a network of railways, was borning for the most far-seeing minds: the matter of railways during the Risorgimento dealt with the creation of the national conscience.

The project for a national network of railways started after the overcoming of the divisions in different states that led to the proclamation of the Kingdom of Italy.

From 1861 to 1865 the constructive effort was considerable. The important line Bologna-Ancona-Foggia, the Roma-Napoli via Cassino, the Roma-Orte-Ancona and the “Porrettana” from Bologna to Firenze were led to the end. Especially important was the period between 1865 and 1885. In 1865 was promulgated the law for the administrative unification of the Kingdom to give an order to railways and, in the same year, the network was divided between four big societies. After the creation of the spine of the country, was the turn of Alps. The first big tunnel was realized in that period: the Cenisio tunnel (finished in 1871). In 1884 the Gottardo tunnel was created, while the Sempione tunnel would have become effective in 1906. Meanwhile the creation of more than 6000 km of secondary railways was financed. The government reorganized in 1885 the Italian railways: the lines were concentrated in two networks disposed lengthwise in the peninsula.

The Conventions had a sixty years long duration divided into three periods of twenty years: the cancellation of contracts was possible at the end of each period. In 1905, the first deadline, the management of railways was adopted by a single State company.

Further interesting things as events concerning steam locomotives, carriages and train stations are connected with the development of the infrastructure. Small and medium-sized train stations laid down in an unique model in the whole nation created a common visual language. Big cities stations designed as architectonic projects that started to be part of urban scenography, intensified on the symbolic plane the role of unification and develop accomplished by railways.

Laura Facchinelli
Laura Facchinelli from Venice, graduated in "Lettere" at Ca' Foscari University, is a journalist that works in the culture and transports field. She published some books about history of railways and a huge number of actuality essays and articles. She contributes to the daily newspaper "Arena" and to engineering magazines. She is the director of Trasporti & Cultura, a magazine about the architecture of infrastructures in the landscape. She planned and organized meetings and cultural initiatives. She attended some courses at "Academy of fine Arts". She has always painted and she gave art expositions in Italy and abroad. 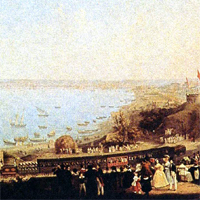