Italy United... by the Infrastructures

The events that led to the proclamation of the Reign of Italy in 1861, after the heroic actions by Garibaldi and the wise politics by Cavour, opened a new stage in Italian history. This is an important moment for a country that had always lived divisions among different political parties and had always been dominated by foreign rulers. The Italian state was created in an important historical period made of technical and economical development thanks to several technological inventions, such as textile machines, the train, the electrical telegraph. These inventions needed also a development in communications. Soon after the Unity of Italy the conditions of the last ones were considerably backward. From the physical geographical viewpoint, the distance between the two extremes of the peninsula, leaving out also the two main isles, was longer than that of all the other European Countries. Besides, just in the Po Valley and along few flat coast lines the relief conditions were suitable for building roads, railways and modern highways. Currently all that is clear: there a few stretches without flyovers, bridges, tunnels and viaducts, which have greatly contributed to transform the landscape (for example the link Genoa – Savona, belonging to highway Fiori – Genova/Ventimiglia – opened in 1967, includes 158 km built along the coast with 27 galleries and 90 viaducts). Historically the “entries of Italy” were the alpine passes and the ports on the coast. The “Belpaese” has been perhaps the most famous example of what the geographer Jean Gottmann called the “crossroads regions” (carrefours) with openings to the world which have given them great opportunities to connect and exchange. In the globalization age  the new entries to the world are the international airports, while the telematic networks contribute to get rid of the idea of border itself. A journey to discover the thick and wide realization of communications and telecommunications works which, in different ways, have created “ the united and connected Italy”, with a huge effort being greater than the one of the other European Countries, for historical, geographical and urban planning reasons. Networks being fundamental not only for the economic growth and development, but also to build the national society and conscience.

Stefania Maffeo
Stefania Maffeo is 34 years old and was born in Salerno. She works as a freelance journalist and she is experienced in contemporary history. She writes for www.storiain.net and www.turismonews.it, and she works as a teacher of history, journalism, and creative writing in several schools. She won several national prizes  (Luciano Castaldini, Pietro Bianchi). 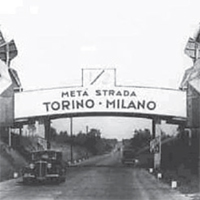