A Dirge in Sicilian Judaeo-Arabic on the Slaughter of the Jews in Noto and Modica in 1474 (Ms. Parm. 1741 from the Biblioteca Palatina of Parma)

The present study gives the editio princeps of a qīnah, a dirge in Judaeo-Arabic written in Hebrew script, referring to the slaughters of the Jews perpetrated in Noto and Modica (Sicily) in 1474. The qīnah, published here for the first time in full transcript and translation, is found within the Ms. Parmense 1741 (formerly De Rossi 570), preserved in the Palatine Library in Parma, and included in a Siddūr, a book of daily Jewish prayers, supposedly copied in Noto in the late 15th century (folios 299v-300r). Three aspects render this dirge particular and unique: firstly, the fact that it was evidently composed in Sicily, or in any case by Sicilian Jews; secondly, the language in which it is written, namely Sicilian Judaeo-Arabic; and finally, the topic of the second part of the elegy, which explicitly refers to events that took place in Sicily.
In the second half of the 15th century, Sicily witnessed renewed episodes of anti-Jewish violence, reminiscent of those that had taken place several times at the beginning of that century and at the end of the previous one, as part of a phenomenon shamefully widespread all over Europe at that time. Violence, riots, harassments and massacres exponentially increased in Germany, Spain, Italy, including Sicily, usually under the old pretext of grave sacrileges allegedly committed by Jews against the Catholic Sacraments, of the ritual murder of children, as well as blasphemy and insults to Christian dogma. Moreover, this atmosphere had been inflamed and fostered under the influence of anti-Jewish sermons, mainly by Minor Franciscan Friars and Dominican monks, which increasingly spread throughout Sicily during the 15th century, with the acquiescence of the Church and the Aragon Crown. 1474 was a particularly bloody year, shaken by riots and pogroms that occurred throughout Sicily and reached their peak in terms of gravity and scale in the slaughters of Modica and Noto. The Modica and Noto massacres were perpetrated between August 15th and 16th, 1474, on the occasion of the then newly introduced Feast of the Assumption of Mary. The immediate cause of the outbreak of this terrible violence was some allegations of blasphemy and grave insult to the Catholic faith against the local Giudecca. Today, most scholars offer a sociological reading of these events, in the light of the important role played by Jews in trade and in the management of the slave trade in Sicily at the time. Nevertheless, some other scholars are inclined to attribute almost exclusively religious motivations. The present paper sets forth the main lines of these various opinions.
All the official archive documents referring to the events of Modica and Noto have been comprehensively examined and published by scholars at different times, and have been recently included almost entirely by Shlomo Simonsohn in his multi-volume The Jews in Sicily. On the other hand, to date there is no other known internally generated Jewish source, except this qīnah, regarding the slaughter.
The first part of the dirge is largely dedicated to the 9th of the Jewish month of Av, a tragic date for the Jewish people, when the destruction of both the first and second Temples of Jerusalem is commemorated. The second part of the qīnah, regarding the tragic events of 1474 in Noto and Modica, does not obviously intend to provide a historical testimony of the events; we therefore do not find detailed descriptions of the riots and the massacre, nor elements for a precise reconstruction of the events. It serves instead as a ritual – a collective and social function – in order to preserve the Communitarian identity and the Historical Memory.
Many central topoi of the Jewish elegiac tradition and references from the synagogue liturgy are present in the dirge, such as the destruction of the Temple of Jerusalem, the interruption of the relevant cult, the desolation of the Holy City, and the forced Diaspora amongst the Gentiles; the image of the Matriarch Rachel, weeping for her children, in this case specifically for “her children killed in Noto and Modica”; the souls of the dead joining Rachel in her weeping and consoling her grief. On the other hand, we also find invocations for the rebuilding of the Sanctuary, the restoration of the Holy Service and the sight of the Redemption “with our own eyes”. The content of the qīnah presented in this study is examined from a historical, literary and stylistic point of view, while the original Judaeo-Arabic text is analysed from a linguistic and philological angle, as a large section is dedicated to grammatical, phonological, morphological, syntactic and stylistic aspects of the language of this dirge. Finally, all the archive documents quoted in the present study are offered to the reader in their entirety in the appendix. 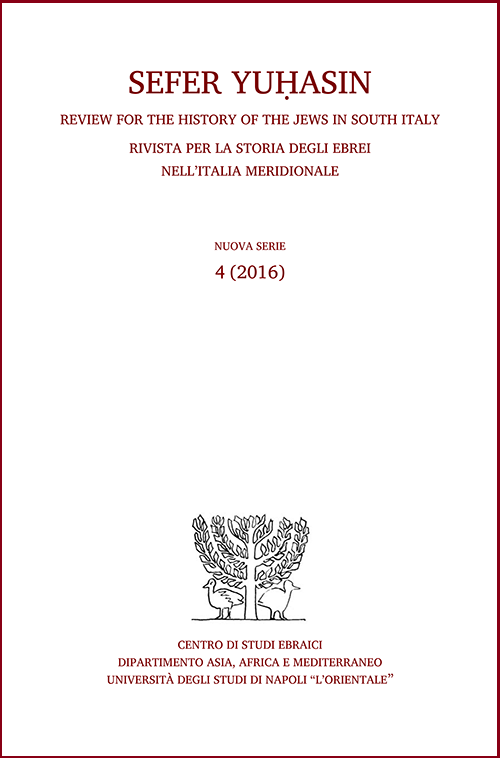