Smart Parking Pricing: a New Way Towards an Equalization of Car Parking

The relationship between city and car is in crisis and the difficult relationship is increasingly emphasized by the “breathing” difficulty affecting modern urban concentrations everyday. According to the APAT IV Report on the quality of urban environment in 13 urban areas (out of the 18 tracked) the thresholds of PM10 and NO2 exceed the limit allowed by law . As everybody knows, road vehicular transport is the main emission source of the two dangerous pollutants. Considering the levels of integrated pollution (air, noise, OEM) achieved by the major Italian cities, it is clear that it is necessary to think over the relationship between cities and cars in order to split the alliance. Most of the urban sprawl is due to the redesign of the urban pattern that, form the industrial revolution onwards, has introduced the motor vehicle, exceptional interpreter of the the’30s futurist culture. The implemented contrasting or discouraging policies have been established in many cities worldwide. The increasing use of road pricing, particularly in Anglo-Saxon forms of Congestion Charge, shows a widespread tendency to hinder the car traffic in the city center and to reject flows in the ring areas. The belief that in the city, or at least in its central parts, private vehicles circulation should be limited or even excluded is now widespread and shared also by the administrators. However, the other side of the coin should be considered as regards the demand for mobility not met by the Public Local Transportation (TPL) of many Italian cities. To foreshadow some possible solutions, it is therefore necessary to think from a new point of view, which considers factors such as: the effective polarization of mobility flows from the urban functions, the TPL availability representing the real alternative to private car mobility, the integration and the interchange opportunities in TPL network, the covering percentage of the municipal territory, service levels and efficiency. Where such requirements persist, apart form Road Pricing policies, new policies to control car-parking should be implemented, which would mainly consider the urban site of movement origin (i.e. the residence of the car owner), the potential accessibility and use of TPL in that area and the consequent pricing regulations of the destination parking-area which will consider also the level of functional density and the polarization of the target areas. This article is inspired by some stimulating papers in the international literature, including some linked to the Neapolitan transportation school, which has always been very sensitive to these problems, probably also because Naples urban reality is a meaningful example in this sense. The article describe a possible procedure to identify the different urban polarization due to urban functions allocated and envisage a method to charge the urban parking by considering the location dependent parking fee with a specific design for the city of Naples a very well-known city for its atavistic problem of urban parking. 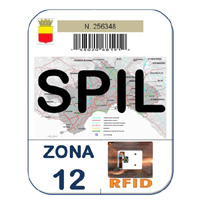