The River Solofrana Bicycle Network: a Project of Green Mobility

The article presents the “LungoSolofrana” project, has been carried out during the course “Urban and Mobility” in the academic year 2009/2010, held during the bachelor in Environmental Engineering at the University of Naples “Federico II”. The work has also been chosen as a finalist to participate at the “UrbanPromo 2010” contest, the urban and territorial marketing event sponsored by the National Institute of Urban Planning and Urbit which was held in Venice 27 to 30 October 2010.

The project consists in a green mobility proposal, developed with an approach based on the integration of the environmental redevelopment of a portion of river Solofrana, situated in Salerno province, and of the renewal of seven local stations of the railway line Mercato San Severino – Nocera Inferiore, including the realization of a cycle-path network for the natural environment fruition.

Furthermore the work drew attention and regards of the local and regional administration. The main intent of the project is to integrate sustainable mobility themes with the environment recovery in a territory affected by high environmental troubles.

The area extension is about 84,30 sqkm and it is crossed by river Solofrana that is the central point of the project idea. The intervention strategy is defined in two kinds of actions: internal and external rail station interventions. The external rail station interventions regard the construction of pedestrian-cycle paths with the scope of increasing the spaces dedicated to cyclists and to pedestrians along the river Solofrana sides and to connect the urban areas with the railway station. In this way, it’s also possible to achieve an urban requalification of the interested area. On the other side, the interventions inside the station , according to Transit Oriented Development principles, aim at redeveloping common spaces with the insertion of new activities and at realizing new automatic cycle parks covered by photovoltaic panels.

The project proposal consists of the urban regeneration of small railway stations along the route-Nocera-Codola Mercato San Severino in the province of Salerno, through interventions aimed at improving pedestrian accessibility. The project involves in particular the construction of pedestrian paths protected access to the station and connecting with neighboring towns and installation of innovative bike parking stations in elevation, covering surfaces coated with solar panels and spaces information.

The project is aimed to propose a new model of sustainable transport for small and medium shifts as an alternative to private transportation.

Engineer, Ph.D in Urban System and Civil Network Engineering at the University of Naples Federico II, where is professor of Urban and Mobility Planning.

Bachelor degree in Environmental Engineering at the University of Salerno, he is actually master degree student in Environmental Engineering at the Federico II University of Naples. Creator and director of web site www.castelsangiorgiomobility.it, he developed the River Solofrana Bicycle Network project, which has been selected and shown at the Urban Promo exhibition 2010 in Venice. 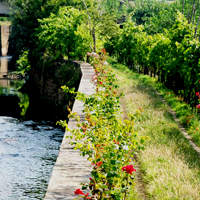